OK, I have to admit it now. I am very traditionalistic.

I like my Christmas presents opened on Christmas Day. Christmas Eve openers simply can’t take the suspense. I like turkey, stuffing and sweet potatoes at Thanksgiving. Ham is for Easter.

And I put up my yard signs on Labor Day.

Here in Texas, it is a state law that no homeowner’s association can dictate the time of putting out political yard signs any time between Election Day and 90 days prior to Election Day. That means this year anyone can put up a yard sign starting on August 9th. I know of at least one blogger who took this law and threw it in the face of the blogger's homeowner’s association.

But Labor Day is a meaningful Democratic day, and that is when I put up my yard signs with no apologies to anyone. 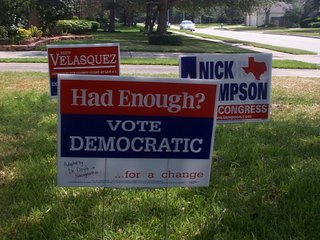 And I have a humdinger to put up this year. You’ve all seen it here and here and Krishna knows where else. Everyone should have this sign. It’s not special to CD-22, but it is appropriate, given all of the drama and legal wrangling this year, that the Fort Bend Democrats also feature this message to Fort Bend County voters.

And look closely. Lower left corner. It’s signed. It is one of the sponsored signs bought and paid for at Juanita’s Adopt-A-Sign deal of the decade. That’s Juanita Jean’s own handwriting. It was adopted by Dr. Doyle in Nacogdoches. I was told that Dr. Doyle teaches at SFASU, so I tried to find the good Prof. on the university’s website, only to be stymied by two Doyles, one who uses it as a given name, and one who uses it in a hyphenated last name.

So whichever you are, Dr. Doyle, thanks for adopting this sign. I will protect it with my twelve gauge Dayak dart blowgun. It’s great. It even has a pig sticker on the end that I use to open mail.

Don’t know what a “Dayak” is? Google it.

Typically Dayak dart tips are coated in a fast-acting poison. I tip my darts with scrapings from the Half Empty Hound’s grass regurgitations. Targets don’t die, but they are grossed out for the rest of the day. Half Empty Hound, by the way, is almost identical in appearance to the dog that Shelley Sekula-Gibbs apparently attempted to choke in one of the oddest photos ever taken by anyone, anywhere.

And now I have papers to grade and lives to ruin. Then I get to eat some barbecue with a galaxy of Democratic Party-ers, and the candidates that they support.