Well there’s another event to go to here in post-DeLay Fort Bend County, Texas. The Fort Bend County Democratic Party is hosting a major party and rally this Saturday, September 23rd, in Oyster Creek Park. Here is the flyer that is being distributed with all the pertinent information: 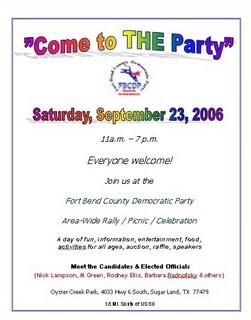 This will be a nearly all day event, but I am counting on things picking up toward the end of the day – mainly because I plan on being busy in the early part of the day. My folks at the Fort Bend Democratic Club will be there selling the much-acclaimed and nationally recognized “Had Enough” lawn signs, so if you don’t have one yet, you know where to go. And if you can’t make it, they are still selling like hotcakes at Juanita’s Adopt-a-Sign campaign where you can have Juanita Jean herself write your message to Fort Bend County voters and it will be planted in DeLay Land.

I also want to make another appeal to anyone who reads this blog. Richard Morrison, who ran against Tom DeLay in 2004, has had a television ad made. I ran a You Tube of it awhile ago, but that was before the Fort Bend Democrats started trying to get some cash together to get it on the air this Fall. Play it. If you are like me and can see how this ad could give a final nudge to a fence sitter or independent voter, make a contribution to the Fort Bend Democrats’ fund.