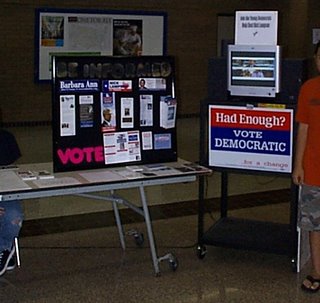 When I am not teaching, blogging, block walking or cleaning up after the Half Empty Hound, I work with the Young Democrats whose club I sponsor at the high school I work at.

Last night was “Club Night” and the club had a booth set up to garner recruits. Mitch, David and Jamie helped set up, Julia stopped in from time to time. Parents hovered.

And thirty kids signed up to become members.

Now in Texas, that may or may not be significant, depending on your location. But here in Tom DeLay’s old district, I’d say that was completely significant. Doubly significant because they know that Our Tom is not an issue anymore. They don’t care who or whether a Republican is running, they just want to support Democrats.

So what if they can’t vote (although I, as a registrar, will be sorting out who can and who can’t very soon now). They have youth, energy and desire. That and a pair of hands are all a campaign needs. Thirty pairs of hands can make a dent. 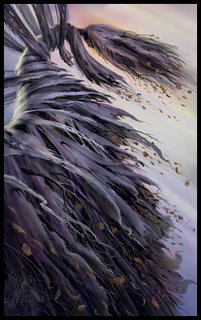 You can’t quite make it out what is being shown on the computer monitor, so I’ll tell you. It was a looped sequence of Nick Lampson commercials combined with the older “On the Road with Nick” video. Audio was enhanced by a stereo amplifier and speakers. Every once in awhile above the din that was Club Night, I could hear “Stop borrowing and spending for a change” the famous “Megaphone Granny” refrain on his economics commercial. People love that commercial, and I am told that the lady, a member of a local democratic club, is now recognized on the street and gives out autographs.

Definitely the best booth of the whole bunch. And the kid manning it could talk anyone into signing up on the sign in sheet. I mean, I was about to sign up. You gotta love high school kids.