"Your Cheatin' Heart" or Why Does The TEA Waste $$$ On Test "Data Forensics"? 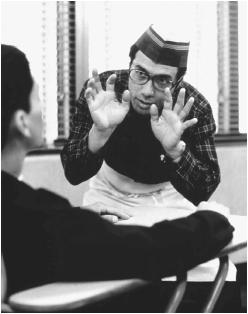 FortBendNow has an article on its site right now about how the Texas Education Agency is going to investigate “testing irregularities” on its 2005 TAKS test. Go read about it, and my rant in the comments section (#6).

Do you remember the movie “Stand and Deliver”? It starred Edward James Olmos who played true life teacher Jaime Escalante, a computer programmer who decided that he wanted to teach high school at Garfield High School, an Hispanic-dominated school in Whittier, California.

They didn’t have computers at the school, though, so he became a math teacher.

Well, as the story developed, Escalante began to have the idea that if he could really and truly challenge some of his gifted Hispanic students, they would blossom and break out of the barrio experience. So he taught them an AP class in Calculus. All of his students passed. This caused concern at the College Board, who analyzed the answers that the students had given, and decided that there was a pattern, testing irregularities that suggested that they all cheated.

The students had to retake the test in order to prove they weren’t cheaters.

And they all passed again.

Well now this kind of thing has come home to roost in schools all over Texas.

In its quest to maintain test security the TEA has been contracting a Utah-based company, Caveon Test Security, to conduct investigative audits of TAKS test security.

Among other things, one thing that Caveon does is conduct “Data Forensics” that detect “aberrant patterns” among test takers. They define aberrance, in this case as “a pattern of item responses that deviate from the statistical models describing normal test taking patterns”. In other words, those who cheat on tests have different test taking patterns than the norm. And you know, this is exactly what Jaime Escalante’s students were accused of. Go here and read all about it. It reads like the Bush Administration justifying the Iraq War. Smoke and mirrors. Someone who does well on a test, gets the questions right, works quickly, is an abnormal student. Students who do well on the TAKS test, you see, are very probably cheaters. That’s their logic, and that was the logic of the College Board in the Escalante case. Students answer a difficult question correctly, and an easy question incorrectly – that’s an aberration. That’s not the norm. Maybe not in Caveon’s world, but I doubt that they have been in the classroom recently if at all.

Now how can I give this a political spin?

Chris Bell is in favor of doing away with all of these “high stakes” tests. On high stakes TAKS testing Bell has said:

“I think we are wasting a tremendous amount of time. And I really think we have to begin to wonder if we’re even teaching kids to think anymore, or just simply teaching them to regurgitate information that has been crammed into their heads. It’s a very serious issue here in the State of Texas, and it’s going to need a governor who will address it in a very serious fashion.”