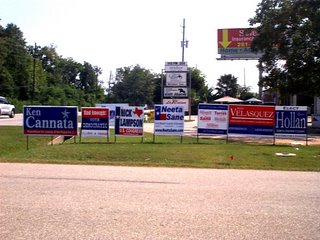 If you have been paying attention, big campaign signs are sprouting up all over Fort Bend County, Texas - well, that is, in places where city ordnances don't forbid them 60 days before Election Day. Here at the right is a photo of what I have come to call a FB Democrats "Sign Swarm". These signs are erected on the commercial and agricultural property of Democratic Party members and sympathizers.

I have acquired an expertise in the art and science of 4 x 4 and 4 x 6 sign erections, and I can tell you that it is hot work in these waning days of summer.

But wait, look at the blue 4 x 6 on the far left, the one next to the "Had Enough Vote Democratic" sign. I know I didn't put one up like that. That's a sign advertising the campaign of Farhan Shamsi's Republican opponent, Ken Cannata.

Farhan is running for Justice of the Peace in Precinct 3. He is just the man for the job. Read his bio at his website if you need any convincing. 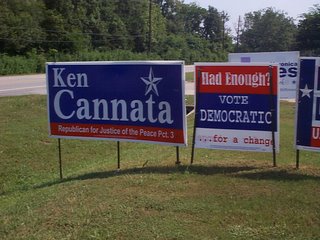 His opponent? A Stealth Republican. Here is a guy who has laid his finger on the pulse of America and realized that if he is going to win this election, he will have to resort to stealth. That is, since he is affiliated with the Republican Party, and Republicans are going to be in all sorts of trouble in this election cycle, he will have to disguise himself as a Democrat. Better yet, he painted his sign blue and planted it right next to a "Had Enough" sign.

Cannata, apparently, is too intimidated to run as a Republican in Fort Bend County. Doesn't that just take the cake? Here in DeLay Country? Oh, that's right, Tom ran off creating all sorts of havoc in his party. Republicans are just mad as wet hens. Downballot Republicans like Cannata will have a difficult garnering those straight ticket votes.

Ken Cannata is no fool, but he is a duplicitous coward.

One last word on Cannata. I have, on occasion, read the comments section in FortBendNow, and have been known to contribute. I once read a thread concerning the ethnic diversity in the Democratic Party, as opposed to the Republican (aka White People's) Party. Someone had to mention Ken Cannata as an example of ethnic diversity in the Republican Party: an Italian-American.

Really, I am not making this up.

Italian-Americans, I need to point out, have been mainstreamed into American society since . . . well . . . since Vito Corleone.

Brady Elliott has just surfaced as a Stealth Republican. You can now view his campaign sign at the far end of the Fort Bend Democrats Sign Swarm in the photo above. And as mentioned in this posting Annie Elliott (no relation) has also a big erection over on that piece of property.
Posted by Hal at 8:39 PM

Well, and the Republicans had a french-american in office for over 20 years - DeLay.

Yeah, based on these two examples, I'm convinced the Republicans in Fort Bend are the party of diversity.