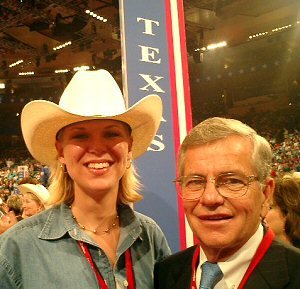 You've got to love it when you catch Republicans saying dumb things in public. Tina Benkiser is a one-woman disaster machine. Her fantastic blunder in trying to get Tom DeLay declared ineligible is inexplicable to those of us who don't really know her very well (or at all). She still claims she got a bum steer from Sparks.

But is it not now clear how Tom DeLay got his party into the fix it is in? Read the words from the Chairman of the Republican Party of Texas as quoted by FortBendNow:

"Shelley Sekula-Gibbs is leading Democrat Nick Lampson 'in double digits at this point in time' in the race for Congressional District 22."

"...'things are tough' in the race for Tom DeLay’s former congressional district. 'It’s an uphill battle,' she said."

Now is it not obvious how this mess that Republicans have gotten themselves into started? The one who uttered these words is also the one who made the calamitous decision to move to replace Tom DeLay on the November ballot because he was "ineligible" (after Tom got his story straight).

Look Tina, let me set you straight. If you are ahead, as in "in the double digits", in a poll, there is no "uphill battle" except the one that your opponent has.

This is as transparent as glass. Tina has absolutely no faith in the push poll that Shelley Sekula-Gibbs commissioned. But she can't bring herself to admit it directly. So instead, she speaks out of two sides of her mouth and the results add up to a big "Wha . . .?"

And it looks like she is still sticking to her story. The national party is "interested in the CD-22 race" and that they would "definitely play in this race" and she "expects that to happen". The 3 million is coming, Shelley, they're interested.

It's been exactly a month to the day of the grand anointing, Tina. You promised then that if the GOP could get behind 1 candidate, 3 million dollars would roll into The Chosen's campaign war chest. David Wallace believed that and tearfully bowed out.

Tina, how long does it take to get that check written and sent off?

Sounds like the promises that Katrina victims were getting from the Bush admins in the days and weeks that followed that calamity. They kept saying: help is on the way.

And I'll bet Tina Benkiser has seen her last chairmanship or party leadership position.
Posted by Hal at 5:39 PM

Yep. Caught that too. They either have their head in the sand, or their head up their ass.

Leave it to the Republican to be able to do that.

Trying to envision both happening at the same time ties me up into philosophical knots - kind of like a mobius strip where you can be on both sides of the strip at the same time.

ooh, I love the mobius strip!

What IS it with Tina? She doesn't seem to be the sharpest knife in the drawer.

Agreed. I even considered including the phrase "not the sharpest tool in the shed" but went for the direct route instead: "plain stupidity"