So there it is.

Health care for all is passed.

Every single Republican in the House voted against it. Everyone to a man and woman.

This vote is Historical with a capital “H.” But the party of the Dark Side all decided to sit it out.

When the dust settles, as it did when Social Security was passed, as it did when Medicare was passed, history will be the final judge on whose were the best decisions here, when Health Care For All was passed tonight with a vote of 219 Democrats.. My bet is that Republicans will have egregious egg on their faces as a result of their non-participation in this Democratic-sponsored sea-change.

A sea change that made history tonight.

Here is the photograph that makes history. 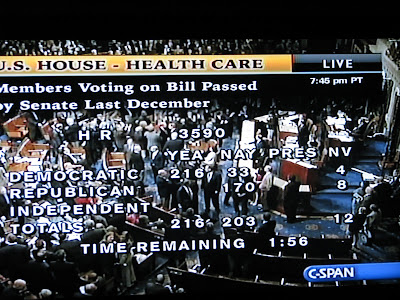 Thirty four Democrats voted against this bill. They had their reasons, one of them being that they represented contestable districts. They did what they could to hold their jobs – to their shame.

Really, I really wonder how many of these 34 will survive November. Not too many, I think. Harry Truman was absolutely right in his observation that a Republican will always opt for a Republican when presented with the choice between a Republican and a Democrat who votes with Republicans.

It’s a game that cannot be won.

Don't you agree that the 2010 Congressional elections will prove how much the people truly wanted this passed? I predict the Democrats will pick up seats because they have done what the people wanted.

This is a joyful time in my life!

I would be a great deal more supportive if we weren't defending the separate congressional, presidential and medicare/medicaid programs too. Roll all of these into one plan and they may save money but institute it with anti-trust cases against these large insurance companies that currently are exempt from anti-trust. Attack the root of the problem not just the symptoms.

Anon # 2. We learned one step at a time so did we learn one giant butt kick at a time when dealing with Republican obstructionist. We are not done! Watch THEM come out from under the covers when we come out with a job bill and other changes to make our Beloved USA great again and respected by other Countries.