Another Anakin Skywalker Goes to the Dark Side 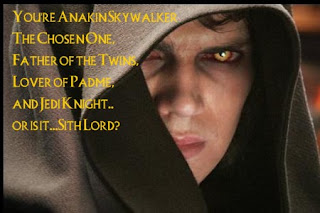 It happens every so often. People switch from the party of all that is good and true to the party of the Dark Side.

I think it’s like Anakin Skywalker in Star Wars. Something just snaps and all of a sudden voting for people with R’s next to their names on the ballot seems like a good thing to do.

But this is what I don’t get: why to you go and switch parties while you are an officer in the Fort Bend County Democratic Party? Isn’t that a bad, bad thing? I mean, jeez, even Anakin Skywalker wasn't a in the Jedi knight leadership when he made his switch, was he?

And then you keep it a secret that you are now a Republican so you can go on and do your worst to the party that you just abandoned. That's too horrible to think about.

But guess what, that has just happened.

I heard about it last evening from my friend, Susan, who writes her not-a-blog. She called and told me the news that she had just found out that the Secretary to the Fort Bend County Democratic Party had voted in the Republican primary.

You see, while who you vote for on your ballot remains a secret between you and The Creator, whose primary you vote in is not. And for a fee anyone can find that out.

What is amazing to me is that in her non-participation in the Democratic primary, that was one vote less for her patron, Elaine Bishop who lost her re-election bid by a mere 101 votes.

But most unnerving is that this individual, a Republican, will remain in office for another month and a half. This is because the County Chair-Elect, Steve Brown, doesn’t take office until May 1st. This is a rule that needs some changing, by the way. What if, for example, a challenger wins over the incumbent in a particularly bitter race (like this one)? What if one of the reasons the challenger ran against the incumbent is that a high degree of pettiness and back stabbing goes on within the Party by the incumbent and her coterie?

I don't think we should warn the Repugs what that are getting. They deserve her. After all we put up with, her snipping, back-stabbing, lying, questionable use of finances, screwing up the paper work, her inability to spell Steve, and being a down-right two faced hussy I can only say... Carol, don't let the door hit you in your big back end on your way out of town!

Oh, my, my--to vote for the other political party while a holding an office in the opposing, political party is a very horrid, back-stabbing thing to do. Who needs enemies with supposed friends who engage in deceitful betrayal? The fact that this woman is leaving the party is a plus, but, it remains a simultaneous fact that the rules should be changed. To have a Benedict Arnold serve out an expiring term when the act of betraying deceit has been actualized, publically is not "right" ; it’s like have an enemy spy infiltrated within your camp or a sheep disrobe to show it is a wolf in your hen house. Yes, indeed, a rule should be in place to address such an occurrence. It is, indeed, harmful for the party that the Benedict Arnold is exiting.

Moreover, even though it was time for Elaine Bishop to go; however, it was “still” very dirty politics for this woman to vote against her patron. Shame, shame, shame. Good riddance to bad rubbish!

Your analogy is so tortured that a true Star Wars fan does not even know where to begin.

So I'll only point out the big flaw: Anakin Skywalker was immaculately conceived by the will of the force. This makes his fall oh-so-tragic. Imagine if Jesus one day flipped out, stopped healing lepers, and starting choking people with his mind. Actually, try not to imagine that. It's terribly sad.

But if a lower level Jedi functionary turns to the Dark Side, say, some sort of semi-regional disgruntled Jedi secretary who was never all that talented with the force and bitter about it....Well that's just predictable.

I myself had some reservations using that analogy, Mark. But since Anakin was the only character with enough name recognition that made the transition to the Dark Side I had to go with it.