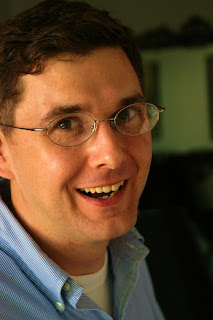 This morning I saw Phillip Andrews - the Democratic challenger in Texas HD 26, who will face Charlie Howard in the fall match up - at a local Democratic club meeting.

He asked me whether I had received his email that he sent to me awhile back on Charlie Howard’s “Religion Anti-Discrimination Bill” and I said that I did. I even wrote a piece on it almost three years ago when Howard introduced HB 3678 in the House. A bill that was then signed by Rick Perry in a high school library in Charlie Howard’s district.

So think about that while you take a look at Phillip’s campaign website, here and here.

Phillip Andrews is angered that Charlie Howard wears his religion on his sleeve and uses it to his political and financial benefit at any opportunity to promote the very big Republican Red Meat Issue of religious expression in public schools.

Phillip Andrews, once a Republican Precinct Chair, broke with the Republican Party on this issue. Rightwing Republican Evangelicals in the party, he told me, visited their religion hourly, making sure that he was indeed “saved.”

The issue of using his religion as a self-promotion tool by tearing down the wall that exists between Church and State is sure to make secular Republicans irate, he says.

Later on today I recalled something that Bev Carter wrote in her column at the Fort Bend Star on the occasion of Charlie Howard/Rick Perry Comedy Hour when Perry signed HB 3678 into law.

“…when first elected, he went around to all the land developers in Fort Bend and asked them to give him a “retainer” to represent them in Austin. One admittedly did. Maybe more, but only one would fess up. And because they were honest enough to tell me, I won’t reveal their name.”

“When I confronted Charlie about his retainer and told him I thought we ELECTED him to represent us in Austin and didn’t need additional monetary rewards to do the job he was elected to do, Charlie told me he was greedy and just couldn’t help himself. He said he prayed about it every day because he knew it was a sin.”

Charlie Howard wears his religion on his sleeve for all to see. He even uses religion in his defense when he admits to his failings and personality flaws. I find it refreshing that the flaws of this man will be a mainstream issue in the upcoming election, and that, when Andrews wins in November, HD 26 will finally have someone in Austin who represents them, and not land developers and proselytizing evangelical Christians.
Posted by Hal at 2:43 PM

Well stated.
This hypocrisy is becoming very disturbing; it is wrapped in a package and being sold to the gullible in this country. It translates as a scam upon the weak minded, under-educated, and racist bigots who engage in counter activities against their own self interests in the name of religion, anti-abortion, anti-gay, anti- any group that is not White; anti-health care reform; and anti-ability to carry guns even to open meetings where the President is speaking.
The political scam is to stroke this darkness and hate by perpetuating lies and deceit. However, what is even more disconcerting is that even though a lot of those who have this darkness and hate within are usually the gullible, weak minded, uninformed, and uneducated; nonetheless, there are some signs of folks who do not necessarily fit this category of the under-educated and uniformed that are jumping on board. So, what I think is that since the election of our first Black President, it has unleashed the racism that is not just within the uneducated and the uninformed. Hence, the deepen reason for the formation of the Teabaggers’ Movement. Although the Teabaggers, here to fore have denied that they were racist; yet, the Teabaggers finally showed their hand to be what we already knew they were when they taunted the Civil Rights’ Icon and called him the N-Word and spat on another Black Congressman and likewise called him the N-Word, and mocked Barney Frank and called him the Fag-Word.

John McCain is out this weekend on the campaign trail with Sarah Palin. In my opinion,
McCain has dittoed the reason he lost the presidential election. He has bought into the scam.

Sarah Palin is the scam. She is milking it for all it is worth.
I guess she does not live in Alaska anymore; she has relocated to the main-land USA.

Anyone but Charlie Howard or Bob Hebert.

--Signed a fiscal conservative who knows Hebert/Howard are tax, borrow and spend liberals (wolves feeding on the sheep)!

It's been a while since any comments have been added. I went to the GROW meeting 9/28/10 - which is currently effectively a Democratic party campaign office. Andrews materials including yard signs are there and the staff gives his campaign points. I'm not a dyed-in-the-wool Democrat, but I have for years been writing and complaining to Charley Howard about his views on gambling and religion and never yet gotten a reply. Andrews sounds like a very satisfactory replacement.

Tim, I welcome the women's grassroots group that has endorsed Phillip Andrews' candidacy as have they endorsed Bill White. This is good work. Sometimes I wonder, though, why they remain silent on women who are also candidates in Fort Bend County. Veronica Torres is a great candidate for District Clerk - she garnered more votes than any other Democratic candidate that ran in 2006. Fredrika Allen is a superior candidate for the 240th District Court. Amazing candidates both. But they did not garner the endorsement of the only women's grassroots organization in Fort Bend County.

And for that, I have to ask WHY?