You know, not all senior citizens are cautiously conservative. I recently convinced my dad, an 81 year-old retired cop, to change parties on his voter registration from Green Party to Democratic. When I talk to my dad about social issues like gay marriage and abortion, the old guy’s nostrils flare and his eyes flash. He says that those issues do not belong in a political debate. I wish that was true, but unfortunately, in an election year issues like that get hauled up in front of the voters to divert their attention from the issues that DO belong in a political debate, things like fighting a protracted war that is, as time goes on, starting to look like a civil war (you know, like the Vietnam War was). Things like Social Security, fiscal responsibility and transparency in government. Things like that.

And unfortunately it is issues like abortion and gay marriage that are foremost in the minds of voters in Congressional District 22. When you talk to voters and mention some of Nick Lampson’s positions on the per 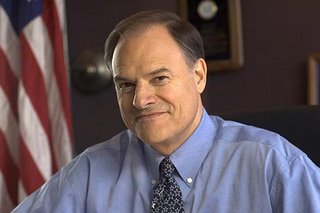 tinent issues, like fiscal issues, it’s sometimes almost surreal when the first question comes back: “yes, but how does Lampson stand on Gay Marriage?” These little diversions are things that Republicans have become so adept at promoting, because they evoke such primal emotions.

So, OK, where does Nick Lampson stand on Gay Marriage? Why not look at his voting record? Novel idea. There it is, right here. He voted in favor of a constitutional amendment that defines marriage as a union of a man and a woman. OK?

Well, I’m not particularly happy about that, but that’s Nick. He’s not afraid of breaking ranks with his fellow Democrats when he sees fit. Why am I not happy about it? No, I’m not gay. I know some, am related to one, but I am not, myself, gay. I have come to the conclusion after years of struggle with the issue, that life is too short for this to be an issue. True love doesn’t occur very often in one’s life. When you fall in love with someone, and want to marry, you should be allowed to. Simple as that. It’s not Gays that upset me, not at all. You know who really upset me though? Bisexuals. They are having far too much fun.

The other issue that comes up? Abortion. Again, it’s all so surreal when you are talking to someone about, say, “Pay as you go”, and they come back with, “OK, but what are his views on abortion?” So, again, go look at the voting record. Then start scratching your head. The voting record gives no clear indication of his views. It appears that he is neither “Pro-Life” nor “Pro-Choice” [Don’t you love those appellations? Unless you’ve been around awhile in this country, you wouldn’t know what either of those viewpoints referred to]

So how do you label Nick’s view? Truth to tell, no single word in the English language describes it, specifically to this issue. Eskimos, Inuits actually, have 15 separate words for snow, but we don’t have one word to describe Nick Lampson’s view on abortion.

Believe it or not, Nick appears to be both Pro-Life and Pro-Choice.

Wait, you say, isn’t that a conflict? You can't have it both ways. You would think so. But last April I got the long-version explanation of his view on this subject in a small crowded room where Nick appeared and spoke on the issues for almost 2 hours.

Let me see if I can reconstruct the argument.

First, Nick is a Catholic. The Church has made its view on abortion to its 1 billion members time and time again that all human life is sacred. So should we have a law that forbids people from having or performing abortions? No, Nick said. That was tried before and it didn’t work. Nick said he that wants America to be a place where there are no abortions. Women will seek out an abortion when they think they have no alternatives. Nick said that we have to pass legislation to make it possible for women not to have abortions. He listed a few possibilities, one that I recall being assistance to women who have financial reasons for needing an abortion.

And that, in the end, is why I like Nick. He doesn’t let strident beliefs direct the issues. He is a pragmatist and a negotiator. He doesn’t want to dictate what people ought to do in order to achieve a goal, he wants to explore as many paths as it takes in order to allow people to make decisions toward that goal.

Contrast that with the views held by “Pro-Lifers”. They apparently have no problem

with women and girls getting carved up on back alley abortionists' tables. That’s what it was like back in the pre-Roe v. Wade bad old days. People forget. Done incorrectly (or more ghastly, done by one’s own self), a D&C, or Dilation and Curettage, killed women, or rendered them unable to bear children in the future. It was horrible but it happened all the time despite the existence of laws against abortion. The laws didn’t work. They didn’t work then and they won’t work now. Nick knows that, if Tom DeLay doesn’t know that it is either because he is ignorant, or he just doesn’t care.

We all need to vote for Nick Lampson, but even more, we all need to get active in his campaign and make sure that he wins in November.
Posted by Hal at 3:01 PM

Well that's the problem, isn't it? We have moderate Democrats like Lampson who are cursed as the Devil Incarnate and a threat to Western Civilization while they are Democrats, but when they jump to the Republicans--like Phil Gramm and Ben Nighthorse Campbell--they become on the side of the angels with the exact same positions!

The only exception was Greg Laughlin, who was so far off the Reservation while a Democratic Congressman in Texas 14 that the Democrats kept making the excuse, "Well, after all, he's the best we can do in this conservative district." So come the Republican landslide and Laughlin jumps parties, saying that ALL ALONG he was really a Republican. Laughlin boasted that he'd handily be re-elected because he was the only Democrat that his predominantly Republican supporters voted for. Except that Ron Paul knocked him out by his Achilles Heel, the Republican Primary. I can't say I'm sorry, either! At least Ron Paul is a man with principle, who doesn't cut his clothes to fit the season.