Rape as a Weapon of War 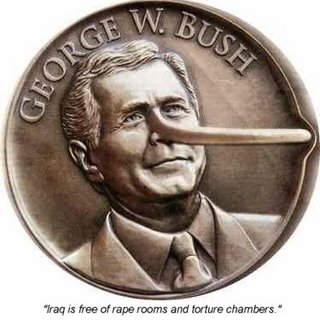 Well, the news is out. America is a nation of unprincipled infidels who feel so superior to the conquered Iraqi people that their soldiers stalk and rape Iraqi women whenever the "opportunity" arises. Does that sound like an extreme view? It would from the American side of the world, but right now you can bet that the view is widely held in the Middle East. After all, was it not the case in Bosnia where Muslim women were intentionally raped so that they would produce Serbian babies? These things go through peoples' minds, and memories don't fade in these kinds of things. Click on the title above and read the BBC article posted on 22 June if you don't believe me

The rape of an Iraqi woman and subsequent murder of her and her family this past March has been labeled by by an unnamed official as a "crime of opportunity" on the part of 5 soldiers in the 502nd Infantry Regiment. A "crime of opportunity" differs from "crime" in general, it seems, when criminals deliberately stalk their prey and attack when conditions are favorable.

One would hope that this, like the My Lai Massacre in Vietnam, was an isolated occurrence. I am characteristically unhopeful. The fact is, the rape/murder occurred in March, and only came to light on 22 June, reveals tacit complicity among others in the platoon who knew of the incident. No one is saying that the kidnapping, torture and murder of 2 soldiers from the same platoon is connected to the earlier incident - maybe because there is no direct proof of it. I am not a huge fan of coincidence. I think that we are looking at an act of sheer retribution.

In Iraq, America is its own worst enemy. If there was hope on the horizon for bringing the insurgency to an end with physical force and American presence, you can forget about it now. America (and Americans) have no credibility in Iraq now. It's time to redeploy out of country. No good can be accomplished by US forces in Iraq now.