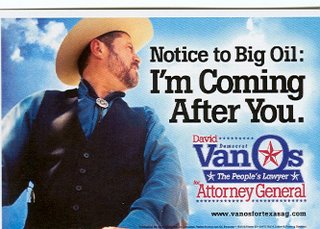 I recently attended some hustings on the steps of the Fort Bend County Courthouse in Richmond. It seems David Van Os (that’s pronounced Os as in “most”, not Os as in “cost”), who is running for Texas State Attorney General, was in town on his “whistle stop tour” of every county in Texas. Yes, you read that correctly, every county. Considering the time of day, 3-ish on a work day, attendance was fair – attracting the paper press.

Standing there in the hot sun, looking dapper in his cobalt blue long-sleeved shirt, bolo tie, dark brown vest, and tan cowboy hat, Van Os looked the essence and image of a Texas politician. Height-wise, he falls below the state average, but what he lacks in altitude he makes up in attitude: the man is one feisty son-of-a-gun.

I didn’t really know what to expect, having never attended a political event for this kind of office. What I definitely did not expect is a lesson in civics, but that’s what we all got: he quoted the Texas State Constitution, and told us all to look it up. I did. It floored me. Understand this: Texas has an anti-trust law written right into its constitution. I quote:

Article 1 - Section 26 : “Perpetuities and monopolies are contrary to the genius of a free government, and shall never be allowed, nor shall the law of primogeniture or entailments ever be in force in this State.”

Guess who gets to oversee this anti-trust provision? Another quote from the Constitution:

Article 4 Section 22: "The Attorney General shall…especially inquire into the charter rights of all private corporations, and from time to time, in the name of the State, take such action in the courts as may be proper and necessary to prevent any private corporation from exercising any power or demanding or collecting any species of taxes, tolls, freight or wharfage not authorized by law."

Van Os pointed out the use of the word "shall". "It doesn’t say may or might"; also the word "especially" – it is a priority item. That’s why David Van Os says that he is "coming after" Big Oil. He says that we are paying such high prices for gasoline because the oil and gas industry has essentially become a monopoly because of all of the corporate buyouts of the past few years

Come to think of it, I was watching Meet the Press a few weeks ago. Tim Russert interviewed the CEOs of ConocoPhillips, Chevron Corp., and the president of Shell Oil. They all sounded as if they were talking from the same cue cards.

I’m not an expert on the oil business, and it looks like those three aren’t either, but there’s something fishy about these record profits. Looks like David Van Os is saying that he wants to do something about that.

Reminds me of an old "Hipshot Percussion" cartoon in the funny papers. Ole Hipshot goes to a man's funeral and one of the mourners asks:

"Mister, was you a friend of Shorty's?"

"Why Mister, you didn't know Shorty at all, he was just a runty little feller!"