As if on cue, out comes Judge Sparks' decision on Texas Democratic Party vs. Tina Benkiser, and what does he find? Not only did Sparks find that Tom DeLay withdrew from the race in CD-22, he ruled that his name stays on the November ballot as the GOP nominee. 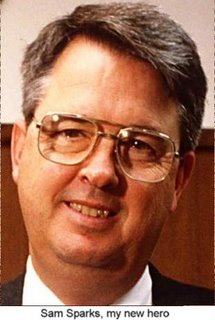 You can bet that the lawyers representing Tina et al. are, at this writing, on their way down to file their appeal at the 5th Circuit Court of Appeals - the one that they have, in all probability, been working on since Sparks' hearing was adjourned on the 26th of June. That's what I would have done, leaving blanks in the appropriate places to be filled in later after reading the decision.

Nice one. The ink is not yet dry on ballots cast yesterday evening to elect the Fort Bend GOP Decider, Terese Raia. Now what does she decide? Does she decide to enter a vote to replace her former demi-god, Tom DeLay, on the ballot anyway? How's that going to look when the Court of Appeals fails to reverse Judge Sparks' ruling?

Republicans are falling all over themselves announcing to the world that they don't think their candidate of record is electable. They're contributing to the Lampson campaign with such vigor, maybe they might consider coming out block walking for Nick this weekend.
Posted by Hal at 11:24 AM

Hal.......remember the judge told Tom to "run like a bunny"! This ruling for sure deserves a prayer from Pat Robertson.