I swear, it’s like babysitting a roomful of 1 year old quintuplets. Once you get one quieted down and sucking on a pacifier, the other 4 are off in 4 directions: toward the kitchen stove, toward the swimming pool, toward the box fan, and toward the paint cabinet.

Just as George smoothed the feathers of his religious right wingnuts by vetoing embryonic stem cell research, his “kill them all and let God sort them out” right wingnuts have started a whisper campaign.

What? You heard it: George “Bring it on” Bush is soft on terrorism.

He didn’t do anything when Korea fired missiles into the Sea of Japan on Independence Day and is letting the Chicoms take care of it.

He didn’t do anything about Iran’s uranium enrichment program, even when they told him to stuff it.

His Middle East policies have lost their last pillar, and now he is sidelining it while Israel subcontracts in the War on Terror.

Two Marines are murdered on tape, Bush does nothing. Two Israeli soldiers are kidnapped, Israel bombards Lebanon and Gaza.

He even let Vladimir Putin get the best of him in a joint press conference.

Why, he’s doing exactly what we thought John Kerry would have done if he were president. 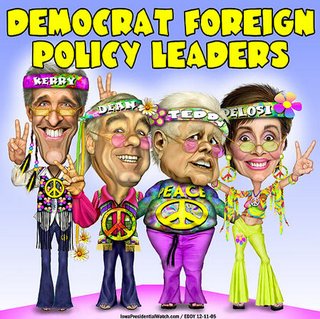 Danielle Pletka, who is vice president for foreign and defense policy studies at the American Enterprise Institute, a think tank that has had strong influence in staffing the administration and shaping its ideas, said this:

“It is Topic A of every single conversation. I don't have a friend in the administration, on Capitol Hill or any part of the conservative foreign policy establishment who is not beside themselves with fury at the administration."

You know, these are the exact same people and organizations that ordered up the paradigm shift at the beginning of the new century: that our American government should mount a preemptive war to bring a regime change in Iraq.

Fanning the flames of discontent the Grand Guru of Demagoguery, Newt Gingrich, (author of the Democratic war cry “Had Enough?”) says he is “Utterly confused”.

My. The extremists are coming out of the woodwork.

So the schism in the Republican Party continues to deepen. People who sounded like raving right wing lunatics just a couple of decades ago are shaking their heads in disbelief. George Will wrote yesterday that the administration is receiving criticism from neoconservatives that is “so untethered from reality as to defy caricature."

I wonder who is going to be first of these idiots to point out that we have an unused nuclear arsenal?