Stem Cells: Another Dance With the Radical Fringe 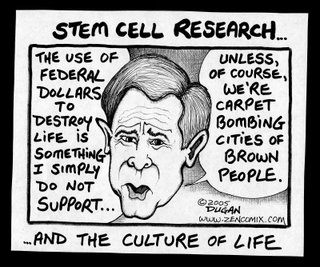 Dubya’s has at this writing (I can hear his speech on CNN in the next room) signed his first veto. Appropriately for these times, it is a veto of a bi-partisan bill passed by large margins in the House and Senate. He vetoed a bill that is supported by 7 out of 10 Americans including former First Lady Nancy Reagan.

He just vetoed the bill to expand federal spending on embryonic stem cell research. Unless a miracle occurs, there are not enough votes in either the House or Senate to override this veto.

It’s all still a little theoretical, but medical researchers are saying that if they can figure out how stem cells direct what kind of specialized cell they will grow to become, they might be able to halt or slow down degenerative diseases like Parkinsons Disease, Alzheimer’s Syndrome, Diabetes, Emphysema, and, dare I say it? Cancer. You know, leukemia took the life of George's long dead sibling, Robin.

Bush vetoed a potential cure for cancer? Doesn’t that forswear all lines of logic and reasoning? Yep and yep.

When people do things that renounce all logic, look for two things to be operating: money and beliefs. Maybe both.

It all gets back to Bush’s Base: the ultraconservative radical fringe. Unbelievably, they have started to press against the corral looking for weaknesses, and that, in an election year, cannot happen. This veto will unify his base like nothing else will. By vetoing this bill, their man will take a “Strong Moral Stand” against the godless majority.

Yesterday, in explaining Bush’s anticipated veto, Tony Snow said “The president believes strongly that for the purpose of research it’s inappropriate for the federal government to finance something that many people consider murder. He’s one of them”

Or at least he wants to be seen as one of them – I am now convinced that George Bush II doesn’t have any personal beliefs. I think there has been just too much damage from cocaine and Jack Daniels for that to happen. Stem cell research may be able to fix that someday.

So who ARE these “every blastocyst is precious” people? A very unified people it turns out. In a Harris Poll that compares “Pro Life”/”Pro Choice” opinions with “When does life begin?”, they had an interesting result. 88% of pro-lifers say that life begins at conception, where only 23% of pro-choicers share that opinion. As a matter of fact, pro-choice people are splintered on the issue of the beginning of life.

So again, the religious beliefs of a conservative fundamentalist radical fringe are determining national policy because George II has associated them with his political base.

Now where else in the world is that happening?
Posted by Hal at 1:17 PM

Man that's good stuff. I had to google "every blastocyst is precious" just see if you coined it.

Well, take a couple back Mark, I cheated. It is a paraphrase of the old Monty Python song, "Every sperm is precious".