How About a Nice Game of Chess? 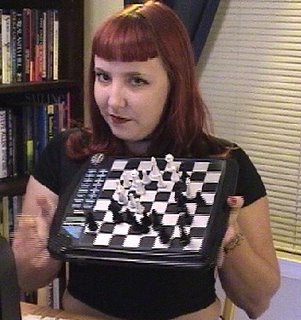 Jeez I'd love to be a fly on the wall at a Nick Lampson campaign strategy confab. Fascinating stuff going on now that Tom DeLay is in, then out, then back in . . . maybe.

A game of chess is afoot, and the stakes are high.

Chess is a game best played knowing what is going to happen at least 4 moves ahead. I'm better at looking backward than forward, but let me give it a try:

Scenario 1: 5th Court of Appeals comes through for Tina (and Tom) and the seven sad sacks of sycophancy are whittled down to one in a smoke-filled back room (better not be a bar in Austin -because Judge Sparks won't let them light up). Bob Talton, the declared winner, the "choice of the people" a la Gary Gillen, and archetypal "angry white man" madly scrambles for money. In addition to "megaphoning the issues", Lampson campaign plays a "follow the money" game because time is short for Bob - corners are bound to be cut. And after all, laws don't apply to Republicans. More Money Monkey Business. End Game: Nick wins. He's going to beat anyone the Republicans put up anyway. People in CD-22 (even some Republicans) are fed up with their leadership, the sleaze, and the corruption.

Scenario 2: 5th Court of Appeals doesn't play ball. Tom officially withdraws and Nick faces off with Bob Smithers (Libertarian). Nick wins - no one votes for Libertarians unless the candidates call themselves Republicans - then it's OK.

Scenario 3: 5th Court of Appeals doesn't play ball. Tom officially withdraws and Nick faces off with Bob Smithers, David Wallace, Shelley Sekula-Gibbs, Tom Campbell and Kristna knows who else - all candidates but Smithers and Lampson are write-in candidates. GOP vote is split, Lampson wins, but the vote totals of all his opponents combined are less than Nick's.

Scenario 4: 5th Court of Appeals doesn't play ball. Tom "The Hammer" DeLay girds his loins to do battle. National attention is riveted on this race. Money pours in to both campaigns from everywhere (except from Abramoff, he's sitting this one out). Seeing his numbers are further south than Tierra del Fuego, Tom challenges Nick to debate the issues. League of Women Voters moderates. DeLay plants thugs with airhorns throughout the audience. Little old ladies with megaphones are leveled with roundhouse punches. The debate eventually happens, but only infront of TV cameras. End Game: Nick wins (see last part of Scenario 1).

Scenario 5: 5th Court of Appeals doesn't play ball. Tom "The Hammer" DeLay girds his loins to do battle. All of the above (in Scenario 4) occurs except there is an inexplicable "malfunction of the electronic voting machines" at several precincts. Nick doesn't win. 5th Court of Appeals rules in Tom's favor (judges rotated, Tom gets a more favorable panel). Tom refuses to take the oath of office, quits again (once a quitter always a quitter). Rick Perry calls a special election (at the cost to Texas voters of 1.67 million dollars). Nick runs, along with Bob Smithers, David Wallace, Shelley Sekula-Gibbs, Tom Campbell and Kristna knows who else - all candidates have their names on the ballot. Republicans split the vote, Lampson wins, but the vote totals of all his opponents combined are less than Nick's (because all voting machine technology is being guarded by federal troops - I know, not something that Dubya would do, but he receives massive pressure from the media, Tony Blair, and newly elected Mexican president, Manuel Lopez Obrador).

Well, that's only 5 scenarios and anyone who knows anything about "Superstring Theory" knows that there are a total of 11 concurrent universes, so there are 6 more out there. I just can't fathom the other 6.

One thing's for certain though, no matter what scenario happens, the checkmate move will always be Nick's to make.
Posted by Hal at 10:25 PM

-The remaining four are explained by www.timecube.com

Your Scenario 2 is way off base. Bob Smithers, the Libertarian candidate is no typical LPer. He's quite mainstream. Plus, he's getting advice from top Republican consultants. The District is heavily Republican and leans libertarian. Plus, it borders libertarian Congressman Ron Paul's old District and even contains some of RP's former territory.

Democrat Nick Lampson is toast. The District is over 70% Republican, and Lampson, the former Tax Collector is universally despised in this Cleak Lake/NASA to Sugarland District.

A Democrat couldn't get elected to Dog Catcher in this District.

Your stats are so off. You've been reading your tracts and not the polls. I bet you haven't been out talking to people and finding out what they think, either.

But I did leave off one thing in the posting, mainly for comedic effect and I'll restate it here for your benefit: No one votes for Libertarians unless the candidates call themselves Republicans - then it's OK (or unless the voters themselves are Libertarians). Can you see how the comedy fails if you add that last bit? No? Oh well.