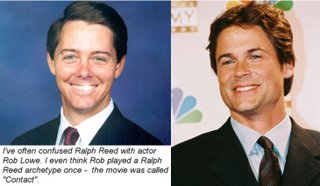 You might have read about the scam attempted by Ralph Reed and Jack Abramoff on “Old Black People” at Juanita’s [scroll down a little, she has a new one on The Appeal that is an absolute scream]. A singularly duplicitous act that rankles in its sheer audacity. Well, now Ralph and Jack, with three others, have a new lawsuit to contend with.

The suit was filed this past Wednesday by the Alabama-Coushatta Tribe of Livingston, Texas. In the suit, they alleged

"…the defendants defrauded the tribe, the people of Texas and the Legislature to benefit another of Abramoff's clients — the Louisiana Coushatta tribe — and line their pockets with money".

It seems that Ralph Reed was hired by Abramoff (they are very old friends; Ralph even introduced Jack to his future wife) to whip up the anti-gambling elements of right-wing Christian conservatives so that a bill introduced in the Texas Senate to allow casino gambling on Indian reservations would be voted down.

Well, that sounds OK, doesn’t it? Ralph Reed is a renowned Christian conservative who was once head of Pat Robertson’s Christian Coalition. He’s on record as an opponent to gambling. Ralph would agree with Albert Einstein when he said “God doesn’t roll dice”. So that’s OK, right? Well, except for the fact that the group that was paying Abramoff to pay Ralph to launch this anti-gambling crusade was none other than the Louisiana Coushatta tribe that owns a little ol’ place in Kinder, Louisiana. Livingston, Texas is 177.32 miles from Kinder, Louisiana (according to Mapquest). Competition. Competition is bad. I think it’s in the Bible somewhere.

Oh the audacity. The hypocrisy. Garrison Keillor likens his effort to Ralph Nader soliciting “money from Ford and Chrysler when he went after General Motors' Corvair. Or the Southern Baptists raising money from Sony and Universal to condemn movies by MGM.”

Ralph Reed explained that stopping casino gambling in Texas was a good thing even if he was hired by rival casinos to do it. Hah, Keillor points out, that’s like saying “Lucky Luciano was on solid moral ground when he knocked off Dutch Schultz.”

So like our Tom, Ralph Reed now has legal troubles in addition to an eroding public image as he runs for public office. Yep, Ralph's rolling the bones. He’s running for Lieutenant Governor of Georgia. The primary is this upcoming Tuesday, and he is facing off against Georgia state Senator Casey Cagle. Last month, polls showed Reed with a 5 point lead on Cagle, but also showed 41 percent undecided. Earlier this month a new poll shows that the primary race is a dead heat at 37-37.

Here’s what I am thinking: If Ralph pulls it off and he defeats Cagle, then he’s going to be a busy boy until November 7th. But if Cagle succeeds, and Ralph is turned away, then Ralph’s calendar is clear. Consultant dollars will pour in at Century Strategies, Reed's consulting company, from Republican campaigns in every hotly contested congressional race in the country. If he is defeated next week, Ralph “Red Cloud” Reed just could be making his appearance right here in CD-22 in the near future.
Posted by Hal at 12:40 PM

Can you even imagine what dirty little thought pass through Ralph Reed's mind when he's alone?

Well, Ralph lost. What a surprise. Everyone says that he is finished. Hardly. Ralph himself has admitted that he does his best work hiding in the bushes out of the public eye. Look for him to resume his activities as soon as he possibly can. There are still a whole bunch of right wing fundamentalist nutballs out there who think "Abramoff" is just another interesting spelling of "Abraham".