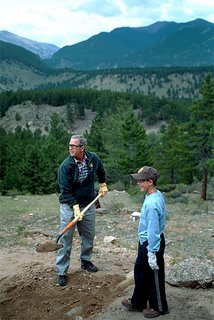 Well, that among other things.

Americans have such short memories. Back in September 2000, when then Texas governor George W. Bush was in a tooth and claw battle for the presidency against Al Gore, this article appeared on CNN.com. In it, Bush blasted the Clinton administration, and its second in command, for “. . .spending too many federal dollars acquiring land and not enough keeping up existing properties, leaving the National Park Service with more property but fewer resources to take care of it”. Oh, the horror. Locking away endless tracts of land from exploitation and development, but not one sou for maintenance. Contrast that to Bush’s announcement this past June 15th of laying aside a tract of land (well, mainly it’s under water) 100 times the size of Yosemite National Park – the Northern Hawaiian Islands National Monument. Now there’s the ticket – put aside this tract of “land” the world’s largest marine sanctuary, and all you have to do is maintain the tool shed and airstrip on Wake Island (built before WWII). The fish are self-feeding.

Why am I ranting about “ancient history”? Well, for one thing, it’s summer – time to pack the family into the old minivan and travel to see our national treasures – the national parks. For another thing, I was reading an article in a throwaway magazine, “The Texas Observer” that I picked up in Rice Memorial Center at lunch, and an Op/Ed piece discussed the Bush administration’s spin-doctoring on the decline of services at the national parks, concurrent with all-time rises in fees for goods and services there. (sorry the article is not online).

Last April, one may recall that the Bush administration demanded that the National Park Service make do with 20% less funding this year than last. Well, with the cost of gas now topping $3/gallon, maybe it will cause a decrease in park attendance so the 270 million visitors that our country’s national parks receive each year may be a bit less. But doesn’t that mean that the total fees collected will be less also? Are we beginning to see a downward spiral that national parks will be hard-pressed to recover from?

Visitors this year may notice cutbacks in such luxuries as potable water access, trash service, visitor centers, and ranger programs, according to the Daily Grist. "The national parks are probably in worse shape now than any of us have seen in our careers," says Bill Wade of the Coalition of National Park Service Retirees.

And what do the spin doctors tell park officials to say when visitors complain about how they are paying more for less? Well, a memo from a Bush political operative is instructing them to say “The National Park Service, like most agencies, is tightening its belt as our nation rebuilds from Katrina, continues the war on terrorism and strives to reduce the deficit” (Jim Hightower in The Texas Observer July 14, 2006).

Outrageous
Here we have an administration that has completely bungled the Katrina catastrophe: wasted millions and millions of dollars on overcharges, graft, corruption and mismanagement and gotten America bogged down in another bungled project called the War in Iraq ($300 billion and counting) that promises to persist, and they are USING those disasters in policy as justification for trashing out our national parks.

Do you think this would be happening if Halliburton had the contract in running the park concessions?

This group maintains a watch over these matters and more.
Posted by Hal at 8:23 PM

I am writing a blog on the lack of impetus to start a GW Bush state park or national park and this explains the hesitency to honor him by any sane park user.