Tom DeLay and the California Connection 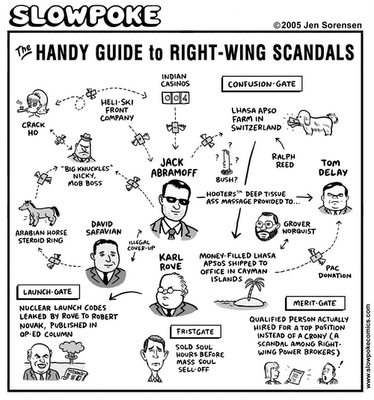 What's the latest buzz on the Jack Abramoff/Tom DeLay connection? Anything? Nothing? Now how could that be? In early January the DeLay camp seemed to be encircled by federal prosecutors who were investigating the connection between Abramoff and Tony Rudy, Tom DeLay's 2nd in command. Much could be made of the statement that DeLay filed in regard to his Abramoff-sponsored golfing vacation in Scotland. Stanley M. Brand, who was a general counsel to the House investigating Abramoff's dealings, described DeLay's legal problems as "extreme."

One example of a case to be made was outlined by Brand:

"It is . . . a federal offense to file false statements on official travel records", Brand said. "On the Scotland trip, DeLay listed the purpose of the excursion as 'educational.' Abramoff and Scanlon could say otherwise", Brand said.

But we haven't heard very much about any connection or any investigation of a connection, since Tom formally stepped down from his leadership position the day before the story broke about the Abramoff probe reaching his second in command, also known at the time as "Staffer A". 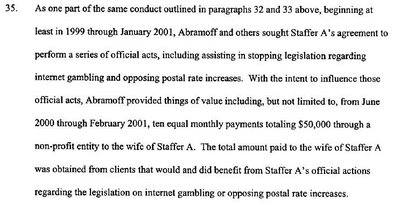 It never was about the money laundering indictments, was it?

From what I can see, all of the Abramoff issues seem to have gone away. Even the cartoon at the top of this article has dashed lines between Abramoff and DeLay. Does Tom have more than one reason than "God wills it", for saying that if elected he will just quit again?

Ronnie Earle isn't going away, is he? A very curious turn of events occurred last week.

Does anyone remember former congressman Randy "Duke" Cunningham (R-Calif.) who was recently se

nt up to a low security federal prison in North Carolina to serve 8 years 4 months for tax evasion, conspiracy to commit bribery, mail fraud and wire fraud? Local Democratic voters in northern San Diego County remember Duke as not being the sharpest tool in the shed. He was fairly easy pickings. Not our Tom. Tom, to paraphrase the famous quote of Muhammad "The Greatest" Ali, floated like a butterfly and stung like a bee. But just as Ali had his Frazier, maybe DeLay has his Wilkes.

Brent Wilkes is the founder of ADCS a California software company. In return for bribes to Duke Cunningham totalling 2.4 million dollars, ADCS-owned subsidiary companies were awarded over 100 million dollars in government contracts in the past decade.

So what does this all have to do with our Tom? Read about it here, but I will summarize. Travis county prosecutors have recently subpoened Wilkes along with companies owned by him, and his business associate Max Gelwix in regard to Wilkes' $15,000.00 donation to DeLay's PAC Texans for a Republican Majority PAC, and Gelwix's $10,000.00 donation to DeLay's other PAC Americans for a Republican Majority. Now why would California software contractors care about whether Texas had a Republican Majority? This question is aptly answered by Chris Feldman, a lawyer who recently won a $196,000 judgement against Tom's PAC:

"It is very rare for an out-of-state company to make a donation to a Texas political action committee. I'm not familiar with PerfectWave, but this type of donation shows why we have our law. We don't want powerful politicians shaking down corporations outside the state, especially when the corporations are seeking favors in Washington, D.C., that have nothing to do with Texas."

Is that as far as it goes? Maybe not. The North County Times also reports this:

"Wilkes' company also hired a consulting firm that employed DeLay's wife to lobby for acoustic technology for the Navy".

So here we have a guy who is being questioned in several bribery and corruption cases, and a guy named by Cunningham himself as his personal benefactor in exchange for contract awards, also intertwined with Tom DeLay, through his PACs, and through the consulting firm that employs DeLay's wife.

One hand washes the other.

Jeez, I need a shower.