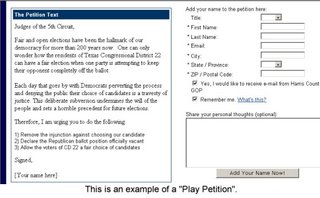 It’s still up except for the fact that there is no link to it anymore on any part of the Houston GOP website. Too late though, people all across Texas CD-22 are collectively holding their sides in over Jared Woodfill’s “play petition” that he wanted people to sign to urge 5th Appeals Court Judges to

1) Remove the injunction against choosing our candidate

3) Allow the voters of CD 22 a fair choice of candidates.

Having received criticism from his own party, uproarious hilarity from the opposition, and bewildered looks and shaking of heads from both sides, Woodfill has allowed to FortBendNow that the petition would not actually be delivered to the court. It was just an opportunity for voters in the district to “let their feelings be known through an expression of free speech”. Well Jared, it isn’t free speech if there is no one listening. What you should have done is put up a series of voting buttons like they have on The Markum Report. Over there they have had (at this writing) 55 votes. Tom DeLay is waaay out in front.

Hey by the way, go over there and register your opinion in their straw poll. I have . . . often. 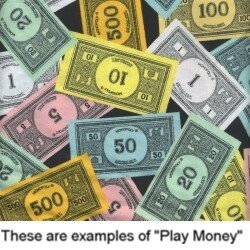 a few mil and run a race against Nick Lampson and that other guy, Smithers. I have to wonder who in their right mind will throw their money at a guy who gladly took hundreds of thousands of dollars from them between January and April 2006, when he knew full well that he wasn’t going to run in November. My guess is that he waited almost a month after the March 7th primary to make his “I quit” revelation on Chris Matthews’ “Hard Ball”, because he hadn’t reached his target amount in his war chest until that time. To get any money from them at all, he will HAVE to tell them that he intends to quit again, if elected.

So let me get this straight. Here’s Tom's plan: Contributors give Tom two-three million dollars, he runs, wins, and quits (again). Now the process starts all over again and contributors have to cough up more millions of dollars to fund the campaign of 7 or 8 Republicans (can’t have a primary, here) who will all run against Nick Lampson. With the conservative vote hopelessly split, Nick wins. OK runoff between Nick and the 2nd placer? Contributors give still more millions of dollars for the runoff campaign.

Here’s what it sounds like to me: the plan is to get millions of dollars from affluent conservatives and corporations by presenting them with crisis after crisis that threaten the loss of a Republican seat in the Texas delegation to Congress. Sweet! ARMPAC and TRMPAC all over again.

That’s sheer genius. All those people who are saying that Tom DeLay is starting to show the effects of prolonged exposure to an outlawed bug spray simply do not see the big picture.
Posted by Hal at 3:34 PM

Remember, even David Wallace has "play money" claiming to have $1 million when he only raised $200,000. He spent $10 on and empty amicus brief and some unknown amount on a negative attack ad on Lampson when he was only a "play candidate".

I'm not sure there was ever a link anywhere on the Harris County GOP website to the "petition." I believe it was a backdoor link only sent in an email to the party faithful. I got maybe 50 copies of the email from the faithful who have lost faith.

It was just another GOP scam from the start - done behind closed doors with no purpose other than to use smoke and mirrors to fool the faithful. Kinda like gay marriage and flag burning.

Yeah there was. I went to their home page to look for it and it was there. It's gone now.

I think the Republican Party's cynical motto about their members is, "If God hadn't meant them to be shorn then he wouldn't have made them sheep."