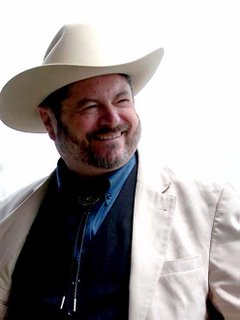 He really said that you know.

I was invited to attend a blogger conference call with David Van Os, Democratic candidate for Texas Attorney General. A first for me. It was a fast hour and I just sat there with my left ear to the phone and my right hand scribbling notes – 7 pages worth. The man can talk. Rather than organize this into some nice little tale with cynical remarks, I’m going to depart from the usual and just tell you what I heard, a literal “notes vomit”. Well, maybe I might digress here and there, who knows.

David said that Americans are hungry for change, and hungry for political openness. David believes that the key to retaking the state is to “repenetrate the rural vote”. Democrats need to talk in a way that shows we are there, and make sure that people understand that Democrats are not elitist people from Massachusetts. Well, hey, at least he didn’t say “Yankees”.

David said that Democrats have to stop writing off parts of the state. When she lost her governorship, it was because Ann Richards tried to assemble a coalition of liberal Democratic metropolitan voters and affluent moderate Republican female voters because she was pro-choice. The coalition failed because the pro-choice voters failed to appear. Now ever since that time the Democratic strategy has been to raise cash for ad campaigns early in the race, then in the last 6-8 week crunch time, play the media campaign – but concentrating on major markets. Democrats have done that year after year and lost year after year.

David said that all he needs to win is an 8 to 10 percent crossover vote. He thinks that he can get this and he illustrated the point by recalling his conversation with a security guard at a “campaign camp” (whatever that is). He recounted the security guard’s remarks in regard to the present Republican regime. He was a long-time Republican, has voted Republican year after year, but with regard to one Republican in particular (wink wink) “he just scares me”, the security guard said, “I’m not going to be voting for them any more.” There is also a wedge issue among Republicans. David said that the Trans Texas Corridor, a plan to build a huge multi-use, statewide network of transportation routes in Texas, is a GOP wedge issue. Both the GOP and Democratic Party platforms have planks that oppose the TTC, but that it is being pushed by the Austin elites. Further on elitism, David says that there is a huge disconnect between grass roots Republicans and the Austin Aristocracy. Time and time again he returned to the theme that there is more similarity between Grass Roots Democrats and Republicans than there are differences. David says the crossover vote is attainable by taking advantage of these wedge issues.

David says that Greg Abbott is a Republican Party political hack. “In 1996 he eviscerated the 1st amendment rights of ‘The Log Cabin Republicans’”, a Republican gay and lesbian civil rights activist group, by refusing them the right to have a booth at the Republican convention. This at the behest of his homophobic friends. David says that Greg Abbott is an “ambitious political opportunist”. He uses the AG print shop daily to congratulate himself for his actions and promote himself. Then he got to present issues. Abbott, in his recent filing of an amicus curiae to the 5th District Court of Appeals re: Texas Democratic Party et al. v. Tina Benkiser, blundered. First, it was “too brazen”. He said that Abbott cited his reason for filing the brief was that Judge Sparks found that a section in the Texas Election Code was unconstitutional. David said that this was “a lie”. Sparks didn’t do that, he just found that rules for eligibility for federal office are in the US Constitution. The federal constitution decides eligibility for federal office. He also decried Abbott’s recent CD-23 boundary map that he submitted, calling it a “brazenly partisan map” that was meant to marginalize Lloyd Doggett, a strong House Democrat.

David said that the first thing he will do in office is to appoint task forces of Assistant Attorneys General to begin to issue investigative subpoenas to major oil companies and the insurance industry. This to begin his promise to carry out anti-trust suits against these monopolies, citing high gasoline prices and high insurance premiums. He said he will reorganize the AG’s office by combining two commissions, the consumer protection commission, and the anti-trust commission into one “Watchdog Commission” that will be beefed up and carry high priority. David is also concerned about the scandalous behavior in the Child Support Office. That records in that office show single mothers receiving checks, when none have been received for years, and likewise, that fathers who have been paying child support regularly are delinquent. The scandal is that these people cannot get any help when they call the office because they keep getting transferred around until they give up and hang up.

David says that regulatory agencies “have been hijacked by the corporate and political elite” He is going to go after these agencies by using the “residual authority that the Attorney General has”. Example, he is going after the TRCC, Texas Residential Construction Commission, which has become a haven for home builders in that it provides a cover up for home builders who produce defective housing (as found by Comptroller Carole Strayhorn, who says that the TRRC is a builder protection organization). He will do this by using the Attorney General’s office “to obtain injunctions against private entities to . . . enjoin them from doing bad things”. Failure to stop earns them a contempt of court fine. This, David says, is a good tool that he will be using a lot. It gets around a claim by any regulatory agency that he is duplicating their job. Regulatory agencies seek fines and penalties. He won’t be doing that, just issuing injunctions to cease and desist.

David says that he will capture the “down ballot” vote of those who vote for Kinky and Grandmother by continually delivering his populist theme.

David says that Greg Abbott is a “Silk stockings, country club, big government Republican” who supports government secrecy. He said that Abbott has continually skated around the Texas Public Information Act, also known as the "Texas Open Records Act”. Whenever “the law is ambiguous”, he “seizes the opportunity to write open records rulings” to keep records secret. David is for more transparency here, citing that Article 1 Section 4 of the act that the “statute is supposed to be liberally construed in favor of disclosure”. He intends to reverse Abbott’s rulings.

David says that he would like to see a return to a paper ballot. That there is no paper record to indicate to the voter that “the vote he cast is the same vote that the electronic impulses record”. Article 6 of the state constitution says that “the purity of the ballot box will be protected” He cited a trip to south Texas on his “Whistlestop tour of 244 counties”. In the primary this year there was an extremely low voter turnout. In calling the voters to ask them to vote, officials found out that voters were not showing up at the polls because they did not trust the electronic voting machine. If David Van Os is elected Attorney General, and someone sends him an opinion request, he will rule that the Texas constitution requires a paper ballot – and that the “AutoMark” system, an optical scanning system, is a paper ballot.

David threw a bone to his audience, calling bloggers on the internet equivalent to the “Committees of Correspondence”, local groups of colonial Americans that kept up the lines of communication and information exchange. These groups, he said, were able to keep the information flowing despite the British clampdown on the press and what they could publish. They kept communication alive to fight back against tyranny.

That’s it, David, you have us just right.

David concluded by saying that “We have to win”. Let’s pretend that the . . . calendar has been changed and 2008 has been cancelled, so there’s only 2006 and we have to win. ”Cease telling yourself that you can’t win. Give up that belief and give yourself permission to do it. The time is ripe for an underdog ticket to turn this upside down.”

I stole your superman animated gif.

Thank you for your copious report on our conference call. You have a few technical errors in your descriptions of some of the legal procedures and issues I discussed, but I am not complaining - in the context of one short hour that ranged over several topics in depth, your attention to detail is impressive and I appreciate it greatly. Thank you very much for your attentiveness, your graciousness, and your time.

The campaign camp - the Texas Democratic Party had a two day "camp" in Austin this past weekend for candidates, campaign staff, and campaign volunteers. It was one of those things where you learn all the ins and outs of field work and such. David spoke at it and I heard he was great.