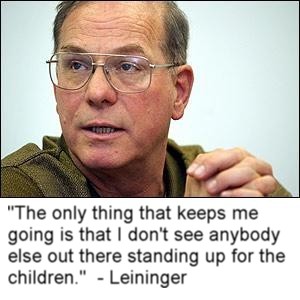 Actually, I need to be slapped around from time to time. Carole Keeton Strayhorn did not invent school vouchers, she merely supported them so she could get elected. Imagine that, an ex-teacher stumping for school vouchers.

A far right religious conservative, Dr. Leininger is often cast as a person who wants taxpayer money to be diverted from public schools to private (and preferably Christian) schools. He wants tax dollars to be spent by the state to fund religious schools so children can “Come to Jesus”. But I am not sure that is his entire motivation. According to Debbie Nathan of the Austin Chronicle in an excellent compendium of articles on James Leininger, James Leininger was born to a family with deep ties to a branch of the Lutheran church that had a few strident beliefs. However, back in the 70’s there was a unanimous "turn-away" from the Lutheran Church on the parts of Leininger and his siblings. His subsequent return to the fold and his religious-ness has been labeled by Nathan, as “Sun Belt Entrepreneurship”.

Leininger made his bones in hospital beds. You know, the health industry. That they sometimes malfunction and maim or poison their occasional occupants probably has no relationship to Leininger’s other vital interest in torte reform. But I digress.

total yearly outlay of the state of Texas from 1985 to 2005. THE two largest capital outlays are education and health and human services. Nothing else even comes close. Both have gone up nearly every year, but notice the rate of expansion of health and human services? Far greater than education. Capital outlays have expanded year by year such that over the last 3 years Health and Human Services outlays have actually exceeded that of Education.

Now we all know about the rise in medical expenses, but look at that graph. Can the bubble pop? How will we be able to accommodate that continual upward gradient? Easy. It costs the state, on average, about $4500 to educate a child in public school. Private secular schools are even a little more pricey. But private sectarian schools are dirt cheap.Why? You get what you pay for:

Nearly all teachers in Texas traditional public schools are certified, yet slightly over half of charter school teachers are certified. Few to no private school in Texas requires all of their teachers to have classroom teacher certification. That makes teacher pay negotiable. Private school teachers are among the most poorly paid teachers in the education community. In any school system the greatest expenditure is employee salary – just as it is for any given business. Lower employee salaries mean lower overhead and that means lower tuition fees.

So Leininger et al. want people to take state school vouchers, put their kids in sectarian private schools, the state saves money that it can now spend on getting more hospital beds. And everybody’s happy, right? Well, except for one small thing:

School vouchers is a stupendously bad idea. No one wants them.

Voucher schools are not accountable to taxpayers and legislators. At the same time the Texas Legislature and President Bush are imposing stringent accountability mandates on public schools and barring promotion and diplomas to children who do not attain mastery on all TAKS tests. On the other hand, increasing accountability would rankle the sensibilities of sectarian educators.

The best way to assist all low-performing students is by strengthening their public school and addressing individual learning problems directly. Vouchers could take away tax dollars from the public schools where children have the greatest needs.

Right wing arguments against vouchers are a little paranoid, but still carry some validity (they’re only misguided, not stupid). They argue that putting taxpayer dollars into private education would allow the government to make demands on content and accountability.

So everyone is happy but the children. Like government construction jobs, they want to award our children’s education to the lowest bidder. 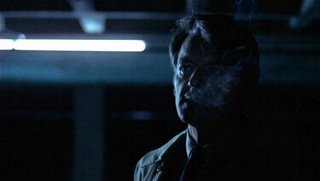 Dr. James Leininger’s claims that he only wants to “help poor kids in San Antonio who can't get out of a bad school”. This is disingenuous snake oil. Like Hal Holbrook’s character, “Deep Throat” said in the movie “All the President’s Men”, all you have to do is “follow the money”.
Posted by Hal at 5:37 PM

I see leninger on the tort reform side of things.

Thanks John. I hate hypocrisy. And I hate all the posturing. I am a reasonable man, but all of this qualifies as a massive quantity of rat middens. Leininger has made himself appear to be such a righteous man, a champion of the oppressed, but in truth he looks to me to be a self-serving man with extreme greed. It makes me truly sick to the point of despair - - - almost.

This is the "Titanic Plan for School Financing." The wealthier students will find places in the lifeboats of private schools while the poor will be stuck in public schools that are hemorrhaging money due to vouchers and literally go down with the ship.

In Pinochet's Fascist Chile one wealthy parent explained their system of public education--"If you want your children to receive a good education, GET RICH!"

This is the "Titanic Plan for School Financing." The wealthier students will find places in the lifeboats of private schools while the poor will be stuck in public schools that are hemorrhaging money due to vouchers and literally go down with the ship.

In Pinochet's Fascist Chile one wealthy parent explained their system of public education--"If you want your children to receive a good education, GET RICH!"

Why should I have to pay taxes for a crappy public school that my kids do not attend? That I should subsidize a school system that I do not use is ridiculous. Let the folks that use the public scools pay for them.

Because it's the law anonymous. If you don't like it get someone to change the law. Oh, that's right, you had James Leininger and he just got voted off the island.

I sympathize with your plight, make no mistake. But you can't fix the problems in public schools by throwing money at a failed experiment.

And that is exactly what the voucher program is.

Hey Anonymous. I don't even have children, but I gladly pay for public education. I would much rather see a child graduating from high school, than see him robbing me at gun-point, due to his lack of skills and education. An educated populace is necessary to preserve and renew democracy.