Texas CD-22: A Fulfillment of an Ancient Chinese Curse 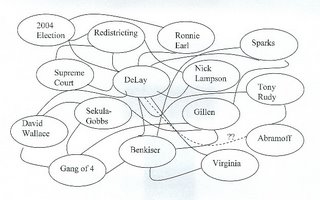 We are living in interesting times. What a mess in Texas CD-22. To better understand it, I tried to diagram it all out in a concept map but it looks like a bird’s nest now (complete with defecation). I even left out a few of the players.

So let’s try again with a new motif – a timeline. It’s horribly simplistic because you can’t see the synergy and interplay of events, but at least it keeps things in perspective.

November, 2004 – Election Day. Texas’ congressional delegation is now 21 Republicans and 11 Democrats. 4 term incumbent Nick Lampson loses his seat to a Libertarian posing as a Republican who under spent Lampson by $709,683.00 in his campaign. Lampson moves to CD-22.

October 19, 2005 – A warrant for Tom DeLay’s arrest is issued. Bail is set at $10k. DeLay flies out on an Abramoff jet for booking, fingerprinting and the famous mug shot.

January 7, 2006 – DeLay permanently steps down from his leadership position in the House at the urging of Charlie Bass and Jeff Flake.

January 8, 2006 – Tony Rudy, a DeLay aide, is investigated for his role in the Abramoff scandals.

“Early January” 2006 – DeLay staffer calls FB GOP chairman Eric Thode and tells him that DeLay was “contemplating the possibilities” with regard to his 2006 congressional race, and the effect that his indictment will have on giving him “less than a solid showing” in the primary.

March 7, 2006 – DeLay wins Republican primary, outpolling his nearest competitor by 2:1. The 62% win, however, cast a pall on the campaign: the “less than a solid showing” became a reality. Nick Lampson also wins in the primary, although he was running unopposed (Democrats agree on something, tide begins to turn).

April 3, 2006 – DeLay tells Chris Matthews that he will not seek re-election. Quoted in Time Magazine, DeLay used these words: "It was obvious to me that the 22nd District deserved more than an election that was turning into a referendum on me rather than what was important to the district”

April 6, 2006 – Nick Lampson holds a press conference on the steps of Sugar Land City Hall, to call for a special election on May 13 to replace Tom Delay (an election that would have Lampson’s name on the ballot). Press conference is interrupted by thugs and hacks from DeLay’s fan club. 69-year old Democratic supporter is assaulted by a 55 year old Republican thug (and Fort Bend County Grand Jury foreman) twice her size.

April 7, 2006 – Governor Rick Perry says that a special election will not be held to replace DeLay, as he has not formally resigned from his office. Governor’s office issues a “White Paper” (also known as a “Y’all Messed This One Up, Tom Paper”) spelling out the difference between withdrawl from a race (candidate’s name is dropped from the ballot) and being declared ineligible to serve (a 4 member committee in CD-22 nominates someone else to oppose Nick Lampson). If no one is selected by the 70th day before election day, the YMTOUT Paper holds, the State GOP Election committee gets to choose someone. Local Republicans begin to study each other suspiciously.

April 7 to April 18, 2006 – Local Republicans throw hats (one of them hot pink) into the ring. In alphabetical order they are: Paul Bettencourt, Robert Eckels, Shelly Sekula-Gibbs, Charlie Howard, Mike Jackson, Robert Talton and David Wallace (and who knows, maybe someone else).

April 19, 2006 – Robert Eckels checks out saying that he could win but wants to “live in the same zip code” as his daughter. A collective sigh of relief is heard amongst his competitors.

April 26, 2006 – GOP Chairman Gillen says he wants to fill 38 vacant precinct chairs who are “willing, active participants for the office, nothing more or less”. It is pointed out by FortBendNow that a “voting bloc" in the Fort Bend part of CD22 could easily be organized, as the precinct chairs will nominate one person to serve on the CD22 Gang of Four who will nominate a congressional candidate.

May 5, 2006 – County Commissioner Andy Meyers finds a hat to throw, and it lands in the ring in the exact same spot that Robert Eckels' was placed, and then retrieved. Andy says that his name is the only one with “district-wide recognition” since Eckels withdrew. Andy who?

May 6, 2006 – Harris County holds a “candidates forum”. Wallace and Campbell miss the boat because they were not properly networking and were unaware of the forum, but after belated protests both are allowed in. Campbell shows, but Wallace begs off, having a “long-standing prior committment”.

May 11, 2006 – Ton DeLay tells Congress he will resign on June 9th, and reveals that he intends to become a legal resident of Virginia rendering him “ineligible to serve in Texas Congressional District 22”. Now has his story straight.

May 19, 2006 – CD-22 Precinct Chairs enter a motion “that the results of the survey (mentioned above) the party sent out be shredded.” Apparently the survey did not include all of the candidates, and apparently David Wallace won, beating out the nearest competitor, Charlie Howard, by a greater than 2:1 margin.

May 20, 2006 – GOP releases survey results. Votes for Nick Lampson are equal to those cast for BOTH Tom and Christine DeLay. . . together. Survey is labeled as inconclusive because some of the candidates were not listed in the survey.

June 8, 2006 – Tina Benkiser determines that Tom DeLay is officially ineligible to run for the CD-22 seat. The detemination came from an official letter from DeLay that contained copies of documents proving that DeLay was a legal resident of the state of Virginia. It is rumored that a copy of his valid Virginia fishing license was among those presented.

June 8, 2006 – Democrats file suit in Travis County to keep Tom DeLay’s name as the Republican nominee on the November ballot. A temporary restraining order is granted by Judge Darlene Byrne preventing GOP officials from taking any measures to replace Tom DeLay on the ballot. If Republicans aren’t a bunch of “angry white men” before, they sure are now.

June 16, 2006 – Republicans, arguing that the suit filed against Berkiser relies on federal constitutional issues, successfully move the suit to federal district court, that of Republican U.S. District Judge Sam Sparks or as we are wont to call him “Rhymin’ Sam”. The suit actually addresses both Texas Election Code and the U.S. Constitution which reads that a congressman must be at least 25 years of age, a citizen/resident of the US for 7 years, and reside in the state he represents on election day. Oops. Tom, Tom, Tom, didn’t you ever read it?

June 20, 2006 - David Wallace announces that he has a million dollars (well, $200,000 anyway) to fight Liberal Democrat Nick Lampson. His meaning I take it, is that he has gone ahead and done something his competitors haven't thought of doing yet. David seems to be quoting the famous line that the character that Ernie Hudson played in Ghostbusters uttered:"We have the tools and we have the talent".

June 23, 2006 - Oddly, David Wallace launches a radio ad campaign. The ad opens with the announcer's description of a sinister effort on the part of that "Liberal Democrat Nick Lampson" to steal CD-22's congressional seat - accompanying music makes you want to hide under the bed. Next he describes a "new conservative leader" in David Wallace, again with accompanying music that makes you want to hug the first person you see on the street.

June 26, 2006 – In Judge Sparks’ courtroom, Tom DeLay swore under oath that he resided in Virginia (although his wife still lives in Sugar Land) and that he didn’t know where he would be living on Election Day. Sparks asked both DeLay and Tina Benkiser why she had received a draft copy of his official notification days before the official determination. Neither could explain why. Unofficially (before final ruling) Sparks labeled DeLay’s action as a “de facto withdrawal”. Dismissing DeLay from the hearing, Judge Sparks told him he could stay or he could go, but that his recommentation was to "run like a rabbit".

1. The judge will find for the GOP and they will go ahead and nominate their candidate in what is shaping up to be the biggest example of opaque democracy since the election of Hu Jintao to Chairman of the Chinese Communist Party.
2. The judge will find for the Democrats and Nick Lampson will be running against an indicted money launderer.
3. The judge will split the difference and go with Governor Perry’s “YMTOUT Paper” finding, which would take Tom DeLay’s name off the November ballot with no replacement. Nick will then have to run against another Libertarian.

Which will it be? My money is on number three. But Sparks is absolutely correct. No matter what the decision is, an appeal is most certainly in the offing.

Post Script: a sideline to all of this is the suit filed by the League of United Latin American Citizens against Governor Perry et al. seeking to throw out the 2nd in a decade redistricting of congressional districts in Texas. The Supreme Court ruled partially in favor of Republicans, and partially against, ruling that CD-23 district boundaries violated provisions of the Voting Rights Act of 1965. But now we have a new paradigm that may change the political landscape of the nation. We can redistrict any old time we want to, especially when state houses develop a majority one way or another. Further polarization is the only foreseeable outcome. Maybe we need national standards? Term limits? Dream on.
Posted by Hal at 3:06 PM

Good grief, what a GREAT recap!! I'll link to this in my blog next time I write about ANY of this. I'm so happy to see this all in one place.

I keep saying that this has been chaotic, like a circus and enormously entertaining. You have just reminded me why I think that.

Well, let me say amen to that and pass the offering plate. I agree with Muse - this is the Rundown of Record for CD22. Excellent job, Hal.

Thanks for connection the dots! And while I'm here, thanks for pointing out the practices of the current administration.

Just saw this site advertised over at Juanitas and wanted to welcome you to the block. We're a Missouri City, TX blog-site that acts as a consumer-watch group on growth/political related issues. Ck us out when you get a chance at http://missouricitychatter.blogspot.com