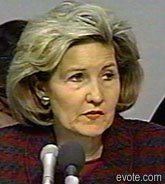 When you see pictures of Kay Bailey Hutchison, they show a benign presence: a fun-loving, caring woman. Nothing could be further from the truth, which is why I post images of her that more correctly reveal what is going on beneath the surface.

Kay Bailey Hutchison sides with Evil. In all of 2005, Hutchison cast votes, 95.6% of which were in support of Bush policies. We like statistics like that, don’t we? I think they are a little cold, though, as they don’t convey the evil that is behind those 3 significant figures.

Here are the cold hard facts about Kay Bailey Hutchison:

Kay Bailey Hutchison wants our daughters to die on back alley abortionists’ tables. She wants Roe vs. Wade overturned so we can return to the glory days of butchery of the fairer sex. She wants to make double sure that this is going to happen by voting against a bill to provide funding for family planning, contraception, and education programs concerning emergency contraceptives.

Kay Bailey Hutchison wants our poor to starve and live in hovels. She made sure of it by voting against a bill to raise the minimum wage from $5.15 to $7.25 over a two year period. She votes for Fat Cats, and against poor people.

Kay Bailey Hutchison doesn’t give a rat’s behind about the victims of terror attacks. She voted against a bill to provide funds for insurance policies that would provide relief to victims of terrorism.

Kay Bailey Hutchison favors the status quo on campaign contributions. Tom DeLay and Jack Abramoff notwithstanding. Kay thinks that if the current corrupt campaign contribution system gets the Right people (pun intended) elected to office, let’s let the old mazooma keep rolling in. When will right-wingers see how bad it looks for them to take money from the Fat Cats?

Kay Bailey Hutchison wants to repeal your 1st Amendment rights to free speech. Burning an American flag (while contributing to the smog problem) is a valid expression of disagreement with policies of the Bush Regime, but Kay wants to make it a crime.

Kay Bailey Hutchison is sick and tired of the whining Hurricane Katrina victims. She voted against a bill to increase financial aid to the victims of Hurricane Katrina. She and Ebeneezer Scrooge would have gotten along famously: “Are there no prisons, are there no workhouses?” 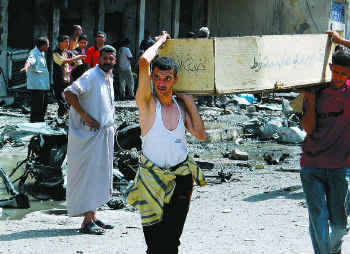 Kay Bailey Hutchison wants Iraq War to continue unabated. She doesn’t care about our soldiers (more on that later), and she doesn’t want to know about what’s going on there, giving Cheney and Rumsfeld free rein to continue the rapes, tortures, and murders of Iraqi citizens.

Kay Bailey Hutchison is an enemy of the education community. She doesn’t think Special Ed students deserve an education. She votes against bills that fund Special Education programs. She also doesn’t think the underprivileged should attend college. She voted against increasing Pell Grants maximum award.

Kaye Bailey Hutchison is an environmental rapist. She consistently votes in favor of opening ANWR, a federally protected area that has a fragile ecosystem, to oil drilling. Halliburton especially would like to see that happen. Cha-Ching for Cheney. She has also voted against a bill that promotes renewable energy sources, and for a bill that would establish yet another nuclear waste dump in Nevada. 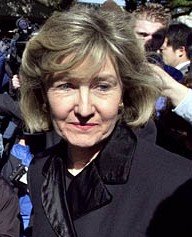 Kay Bailey Hutchison is a homophobe. She hates gays. She doesn’t want them to marry. Or is it this, Kay? The insurance industry doesn’t want to have to insure gay spouses. You know they all have AIDS. Gay marriage will destroy the insurance industry. She also doesn’t want to help AIDS victims get medication. What, Kay, it’s God’s will that they got the disease? Kay wants people to attack gays with impunity. She voted against the Hate Crimes bill that would provide assistance in prosecution of hate crimes.

Kay Bailey Hutchison wants to make it easier for bad people to kill other people with guns. She voted against a bill that would require background checks of people buying guns at gun shows. She also wants to protect gun manufacturers from being sued when someone uses their product to kill someone else. So not only aren’t we going to prevent, say insane people, from buying guns, we want to protect Fat Cats when they sell weapons to loonies.

Kay Bailey Hutchison liked Tom DeLay’s Medicare Prescription program, she voted for it. You know, the one that Tom offered political favors and doled out $100,000 on the floor of Congress to get it passed?

Kay Bailey Hutchison hates Mexicans. She voted against the less punitive Senate Immigration bill, and voted for a bill that would make English the official language of the United States. Que lastimas.

Kay Bailey Hutchison wants our mentally and physically wounded veterans to just shut up and suffer. She voted against three bills that would help out our veterans. Two bills would at least keep the level of medical care at the same level as in the past, and one bill to fund mental health programs for veterans who return from Iraq, Afghanistan (and ?) with mental scars. Like George Patton, Kay would just slap the sniveling cowards.

If you’re still with me, congratulations on your staying power.

Kay’s opponent in 2006, for US Senate is long-time lawyer Barbara Ann Radnofsky. You may have seen my war of words with The Umpire on FortBendNow over this fine woman's candidacy. Ump says we shouldn't vote for her because she has no significant previous experience in political office. I had two points to make on this: first the argument is specious. There have been others elected to high office that have not held other offices. Take for example this guy, and this guy , both of whom ran for governor of California, and won (Republicans!). My other point is that a vote for Kay is a vote to approve the actions of the Bush Regime. That Bush has a 35% approval rating and Kay Bailey Hutchison has a 54% approval rating defies all logic and reason. Obviously these people don't know the facts. From her voting record, Kay Bailey Hutchison is not a nice lady. She's on the Bush Bandwagon 95.6 percent of the time.

Excellent! Somehow KBH needs to be forced to debate Barbara. She gets the free ride and it sickens me. I found your site through Texas Kaos. Very nice.

Say, wasn't there a fellow in Texas who ran for Governor as a virgin politico, got elected, and then became President? Come to think of it, maybe Barbara SHOULDN'T use that as a precedent for what we hope will become a DISTINGUISHED political career.

I dont like Sen Hutchison either. But she is a lot cuter in person than your p;ix indicate. Also she has turned coat and is sponsoring amnesty for illegal allians. But as to the rest of your rant...you are completely wrong in both your viewpoint and what you said. I do hope your Barbara gets the chance to debate Sen.Hutchison. The Senator will clean her clock.

You're right, that's what it was, a rant. What's nice about a rant is that you can say something outrageous about someone, and then demonstrate why that outrageous statement is a logical deduction.

Like this: "TexasBob slept through high school. He doesn't know that 'alien' is a person from a foreign country, and that 'allian' isn't actually a word at all."

You haven't heard the news? Kay Bailey will debate Barbara Ann. Kay's numbers have gone south and she has now agreed to a debate. It will be a good match up, especially because Barbara Ann hasn't waffled on any of the issues, and Kay has, as you so aptly point out.

My dad always said we're judged by the company we keep. I guess that applies to the folks we hire, too. We have to look no further than her point man in Dallas, Jim McGee, to see that she is either sloppy in her hiring, or inclined to overlook personal ethics. He has been divorced three times, public records show he has liens by the IRS, and he was a deadbeat dad in Illinois for years. Now it appears he is using his political influence to avoid being indicted for a drunk driving accident earlier this year that totalled his car and landed him in the hospital. No idea if she's helping hiim with that, but the fact that she has someone like that representing her speaks volumes.

We have allowed our Constitution to become "ink on a page" and now it's pay-back time: for 26 years people in NOLA were warned a hurricane could wipe them out, they did not move away; for longer than that we have seen people abuse our "health" care system, we did not stop them; we believe in a "global warming" effect without real hard evidence; we have allowed "families" to become royalty in our government (Kennedy, Dodd, Gore, Bush); we will allow Islam taught in schools, but not Judaism, Christianity or any others; "Stuff" is about to happen - we all see it happening - but not a single one of us will do or be allowed to do anything about it. As Spock said to himself: "Good luck."