The Percs of Quitting

Final car payment? Gee, Tom, I would have negotiated that deal down a little. What’s the car made of, platinum? 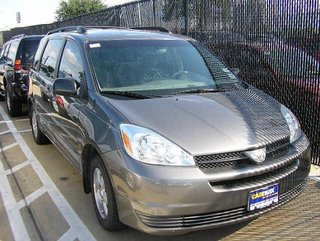 04 Toyota Sienna minivan as your campaign car, in 2003, then plunked down a “final payment” after the campaign was over.

Well what the heck, Tom. I’m still driving around my ’03 Honda, couldn’t you have just used the Sienna for your ’05-’06 campaign? What happened to the Sienna, Tom? Why’d you have to buy another car? Oh, that's right, it wasn’t your money.

I wonder if Ronnie Earle is going to want to take a look at that deal as well. It seems he subpoenaed Toyota Motor Corp. for all records regarding the lease and sale of that Sienna as part of his investigation in DeLay’s 2002 money laundering scheme.

Is that pretty much what all quitting candidates get to do? Buy their campaign cars with leftover campaign money. Hey, that’s not a bad deal.

I like the $500 lunches, too. Nice perk. And hiring your daughter? Priceless!