We, the Fort Bend Democrats, as an organization, do hereby declare our support for State Representative Lt. Col. Rick Noriega to run for the United States Senate from Texas. We pledge our support – with our money, our time, and our manpower – to help Noriega win in November 2008. We urge Rick Noriega to enter the race.

This position was voted on by members of the Fort Bend Democrats political action committee present at their most recent regularly scheduled monthly meeting. I have produced a scanned image of the first page of the position at the bottom of this piece.

Now that we have Melissa Noriega’s Houston City Council seat in the bag, and a Democratic majority on that body now (I know, it’s non-partisan, but hardly anything is these days, is it?), we can now turn our attention to another important matter.

We need to show our willingness to support State Rep. Rick Noriega, and let him know that he has a small army in Fort Bend County should he decide to run for the Democratic nomination in March, which is something we enthusiastically urge him to do.

It is our belief that of all of those mentioned as possible Senate candidates, it is Rick Noriega that best represents our Progressive Democratic ideals.

But it goes beyond that. Rick has a firmly established track record in public service. From his service in the State House, to his military service in Afghanistan fighting The Taliban, to his service on the US border in drug interdiction operations, to his service as site commander at the George R. Brown Convention Center as a shelter for evacuees from Hurricane Katrina, public service defines Rick Noriega – and vice versa.

Join us in urging Rick Noriega to run for US Senate from Texas. Leave a comment if you vote yes. 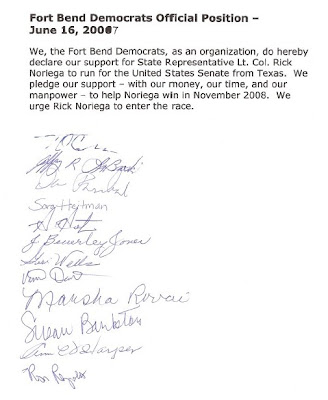 Run, Rick, Run! I've got a check for your campaign -- just tell me where to send it.

Hopefully there will be a direct to Rick's Senate campaign soon.

While anyone can write a campaign contribution to any one with a campaign fund, and it transfers from one race to another, I myself am waiting until Rick puts himself in the race. I think others are waiting also.

I will go on record as stating that I will contribute $500 to Rick Noriega's US Senatorial campaign should he decide to run.

That's a load for me, a lowly public school teacher, so I hope others step up, too.