Well, actually I think he fairly blew through town. The man really gets around. Tomorrow he will be at Howard University in DC and on Friday he will be in Tampa.

It was a Long Hot Texas Summer Day for Ann, Sara and I.

We got to Ann’s place by 11 am. She was almost ready but someone needed to feed her turtle before we left. Ann has a turtle that she raised from an egg and he prefers it if you hold the food for him. Not today though, we were off to attend Melissa Noriega’s inaugural celebration in a pretty ritzy part of Houston. Well, ritzy for me. It was at La Griglia on West Gray. Then on to the John Edwards event. 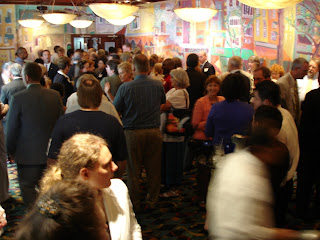 The room at La Griglia was meant to hold 75 but at one point I think we were more like 200 strong. Melissa was running late, so Rick got up to announce that the City Council had extended their meeting and she would be late. This was about half an hour into the event. Then he got up again a little later, telling people that he hoped that they signed the guestbook so Melissa could see who had all come to wish her well. Then when 1:30 rolled around the room held about 30 or so, and we were getting hungry so we finally had to leave.

Best joke of the day: Rick opined that this was payback for when Melissa took his spot in the Texas House while he was in Afghanistan fighting the Taliban, now he, Rick, could take Melissa’s spot while she was having it out with the City Council.

After lunch at HEB’s Central Market we made our way to Houston’s Children’s Museum because I wanted to see a pulley demonstration that one of my students asked me about. I didn’t know what it was about and wanted to see. Turns out it is a mechanical advantage demonstration. But that wasn’t what my student was asking about. He wanted to know why it was easier for a person to pull himself up than for someone not sitting in the seat.

Ah, It’s great when they place a teaching moment right square in your lap.

Then over to the Edwards Event. 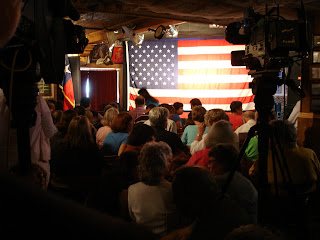 Tammy was there at the door helping out. We exchanged greetings and compliments on each others' campaign buttons, but I think Tammy wanted mine - it has John Edwards' photograph on it.

We got there a full 10 minutes before the 5:00 start time but the room was already 3/4ths full and no open seating. It was very standing room only. We three edged as far to the front as we could get, and only managed to get just behind the TV cameras. There we waited.

Lots of Fort Bend Democrats made it to the event. Scanning the room I saw Albert, Don, Mark and Elizabeth, Marsha, Bev, and Geri. Later I came across Gretchen, Judy, Martha and Farhan.

As we waited the room filled to past capacity. At 5:30 State Rep Garnet Coleman got a microphone, got it turned on, and spoke awhile about the 80th Legislature, and on the Democratic successes. Then around 6 pm he was back to introduce Chris Bell who was there to introduce John Edwards. 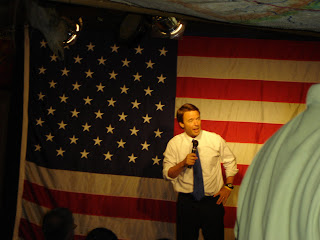 Edwards came in, dressed in slacks and a blue long sleeved shirt with the cuffs rolled up. Now I’ve seen Barack Obama speak, and he speaks with authority. John Edwards speaks with feeling and animation. He truly is the people’s candidate. He is like us.

He began right off with remarks on the hate-filled personal attacks of Ann Coulter, and Elizabeth’s blindsiding her on Hardball. Simply stated, these attacks have got to stop if we are to engage in dialogue at a time that we specifically need to have it.

On issues Edwards was all over the map. Universal Health Care, Stopping the war in Iraq, Torturing prisoners, Guantanamo, having a Supreme Court whose justices reflect the values of a majority of Americans. Dick Cheney and the secretive imperial Vice Presidency. To all of that, John Edwards just had three words: Constitution, Article Two. Yep it’s all there for Cheney to read.

37 million Americans living in poverty. Having to choose between paying the heating bill and feeding your family. John Edwards spoke of his 2004 “Two Americas” theme. It’s still there and the split is getting wider. He spoke of his “One America” Plan unveiled just last week. His plan to reduce rising debt among the poor and middle class.

Guess what he left out? Fear mongering. Any given Republican candidate will talk about how afraid we need to be and how the only party that can protect us is the self-same party that got us into this horrible bloody mess.

What else? Immigration. That red herring that is on the breakfast, lunch and dinner menu of every Republican in and out of office. Illegal immigrants didn’t run jets into the twin towers, the Pentagon and a field in Pennsylvania. All those guys had visas.

Really, if it weren’t for fear mongering and illegal immigrants, Republicans would have nothing to talk about, nothing to say but “Oops . . . sorry.”

It was over too soon but he had lots of signing to do. Don got Edwards to sign a campaign sign that some lucky devil will get to bid for at the next Fort Bend Democrats fundraiser, I am sure.

Then we all went across the street and ate some barbecue.

And all is well in the world.

Dos Centavos has his take on the Edwards Event. While I fully figured that he would be there, I completely missed him. A feat in and of itself. ===> Happy face. (sorry some of my readers don't know when I am making a whimsical joke, right junk?).
Posted by Hal at 10:25 PM

You know what I find hard to believe? Two Democratic events and they didn't feed you at either one! We Democrats are famous for politics and food being tied together at the waist!

Actually, at Melissa's there was food and one of the guys with the trays actually stopped to let us take a canape, but they were few and far between, having to service a crowd of 200.

So it's ironic, at Melissa's there was food but no councilwoman, and at Edwards' there was no food but a candidate.