A Card In The Mail Evokes Memories and Regrets

When I was doing a little research on former Texas SREC member Michael Franks I encountered a comment of his that he left in a conservative blog just after November 7th. Here is what he said:

“It just hit me, that after all these years, Ron Paul will once again be the ONLY Republican Congressman in Fort Bend County!!!! How totally bizzare (sic) that after 3 decades, things have come full circle.”

Let me clue you in Mr. Franks. Fort Bend County has NO Republican congressman. Ron Paul is as Republican as I am. He’s a Libertarian wack job.

CD14 really lost out on a chance to elect someone who would actually do something for his district, not demonstrate his devotion to Libertarian ideals to 5% of his constituency. Shane Sklar would have been great for the district.

I am reminded of the Sklar campaign by two things. One was a “Thank you” letter he sent out to all of the people who worked or helped with his campaign. In my opinion, I didn’t do enough for his campaign, and could have done more. Nevertheless, I got this note with Shane’s personal addition: “Thanks Hal!” 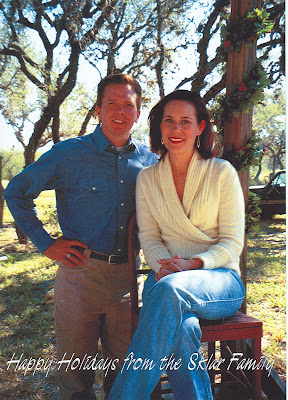 And then the other thing is this. I just went out to retrieve the mail this afternoon, and what do I find in my mailbox? A Christmas card from the Sklar family. OK, it was paid for by the campaign, but still . . .

I really should have done more for that campaign. District wide, Ron Paul won by a 20 point spread. Everyone agrees that Shane’s biggest problem was name recognition. CD14 is huge, covering 10 counties or parts of counties. It was worse in Fort Bend County where he trailed by 51 points. However, the largest population center in the Fort Bend portion of CD14 is Katy which is about 75:25 Republican to Democrat voter anyway. Rabid Republican at that.

Shane actually did carry two counties. Calhoun County by a squeaker: a 2% margin, and Jackson County by 11%. The latter is Shane’s county of residence and there was definitely a home field advantage for him. Example, in the Senate race in Jackson County Kay Bailey beat Barbara Ann by 44%.

So thanks for the card Shane. And Happy Holidays to you, too.
Posted by Hal at 4:56 PM

Guess they're all "kooks" huh?

First, Eric, you need a life. This from one who knows a little about that. That you posted this comment at 2:55 PM on CHRISTMAS DAY, tells me that you are taking this Libertarian stuff a little too seriously.

Second, Eric, you're right. I was being a little harsh in my characterizations of all Libertarians as wack jobs. You're not crazy, at least not all of you. Delusional? Maybe.

Truth is, Eric, most everyone I know has read "The Fountainhead" and "Atlas Shrugged" when they were 15 or 16 years old. But we all got over it.