On the Passing of Gerald Ford 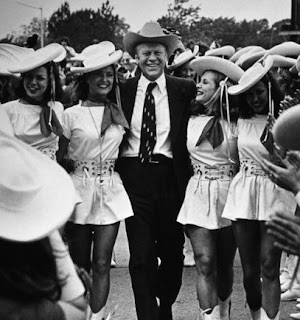 There is one heck of a good write-up at the Washington Post on the life and times of Gerald R. Ford, who passed away yesterday evening in his Rancho Mirage home in California. I read it from top to bottom. It helped me recall many of the events that so very much affected my life: the OPEC oil embargo of the early 70’s, the end of the Vietnam War in 1975, Watergate, and Chevy Chase’s many pratfalls made in parody of what we all perceived as a stumblebum president. Well, all except for the last one. That one didn’t affect anyone’s life except Chevy Chase’s. He clearly made out big at the expense of Gerald Ford.

Don't you love the above photo of him with the Kilgore College Rangerettes in Kilgore, Texas?

I recalled the sense of relief when Ford took over after Nixon resigned. There was such a heaviness on everything. When Ford took over, in his inaugural address, which I can still hear in my mind, Ford said this: “My fellow Americans, our long national nightmare is over”. Or so he thought. We wanted Nixon’s head on a platter. We wanted jail time for Tricky Dick. When Gerald Ford pardoned him on September 8, 1974, I came unglued.

He was born Leslie Lynch King, Jr. His father and mother divorced early, and his mother moved to Grand Rapids and married Gerald R. Ford. Her son, Leslie, was adopted by Ford and renamed. What is more astounding is that Gerald Jr. was not told anything about his biological father. He found out the hard way when his father came through town on his way to pick up a new Lincoln. He stopped in the lunch counter where Ford was working and introduced himself.

The saying “He can’t walk and chew gum at the same time,” was coined by Lyndon Johnson when he was president, and Johnson was referring to Gerald Ford.

Really. I didn’t know that.

Gerald Ford attributed his loss to Jimmy Carter to the fact that he pardoned Nixon. That’s the common thought. To my mind, this isn’t so. The election was held a full year and two months after the pardon. Voters have an uncanny ability to forget stuff like that. If it didn’t happen last week no one remembers.

It was the debate. You remember, the one where Gerald Ford stated unequivocally that Poland was not a Soviet satellite state (geez, it was even called the Warsaw Pact). The look that Jimmy gave Ford was absolutely precious. But that’s not the part of the debate that drove voters away from Gerald Ford. It sure wasn’t. I recall this clearly. Ford had a head cold that night, it was widely reported. He was offering up a summation and there was a close-in head shot of him. You could see it starting in his left nostril. He had a drippy nose, and a drip had formed that slowly and surely traveled down toward his upper lip. But he kept on talking, even as the drip passed to his mouth. I doubt that anyone heard a single word he was saying as we were all watching in rapt attention at the progress of the nose drip.

That’s what lost him the election. Who would trust a man who wouldn’t wipe his own nose on a nationally broadcast presidential debate?

Anyway, Gerald Ford is gone. He had a full life, and he was, from all accounts, a good and decent man when he wasn’t voting against increasing the minimum wage and such the like.
Posted by Hal at 11:33 AM