A Personal Memory of Gerald Ford 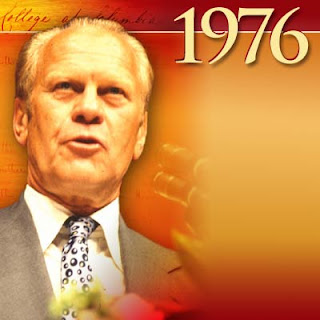 As I listen to Gerald Ford’s Washington memorial, I recall a memory I want to share that just came to mind.

I was in Grad School at USC (the real USC, not that South Carolina one) and Ford was coming to campus to present a half-day course in politics and public administration. It was a big class but there were visitors, as you can imagine there would be. So they moved the class to a small auditorium, whose entrance was overlooked by my supervising professor’s laboratory.

There were four of us students there that day. We were excited and had a bird’s eye view of the arrival portal. He was due to arrive at 10 AM.

Then we heard a commotion outside. A small group of frat rats had lined themselves along the walkway to the entrance, and they were playing the University of Michigan’s fight song “Hail to the Victors”. They were playing it on kazoos. Their conductor kept the pace at double time to emphasize the rivalry of our two schools – a light nudge in the ribs, as it were. They ran through the song twice more at the same tempo, had it the way they wanted it, and then waited for President Ford to arrive.

Then guess what? Yes, they played the fight song, but they played it at its usual regular tempo, even emphasizing the strongly played notes, drawing them out even.

Analysis? There was just such huge respect for the man that they couldn’t as a group, bring off the parody in its full blown form.

President Ford laughed and smiled through the whole thing, talked briefly with them, and then shook each of their hands before going in. I later heard that he informed his audience that he had just been serenaded by members of the Trojan Marching Band.

Anyway, I just thought you should know this.
Posted by Hal at 7:28 PM