Imagine my concern this evening when I learned that Texas Congressman-elect Nick Lampson was not released from the St. John's Hospital in Nassau Bay. I was on my way out to cadge a few Christmas items and was waiting to hear news about Nick on the 6 o'clock news. 5 minutes into the news it was announced that he was kept in the hospital "for observation purposes".

Holy Krishna. They don't keep you all night and all day in the hospital for "observation purposes." But I couldn't find out anything so I left.

Then who do I see on one of my stops but Pat! You remember Pat don't you? My block walking partner this past summer? She was shopping with her husband and I was on my way out when they were coming in. I said a brief "hi", stashed my items in the car, and then went back in to hunt her down.

Pat is the new mother-in-law to a key Lampson staffer and I had to catch up, and find out about Nick. But Pat didn't know anything either. Nick was at a party in a restaurant, that's all she knew. So we traded information, and caught up on our families, then parted.

And now, tonight, I find out, through The Chron, that they found, in an angiogram administered at around 3 PM today, that Nick had a partial blockage in a heart vessel.

That's fixable. It's called a stent. It's a miraculous wire mesh tube that is inserted while the patient is awake and aware, and then, when emplaced, enlarged to open up the blockage. 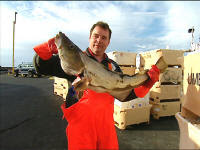 Do your Christmas shopping online like the rest of the civilized world. Save yourself for the fight to increase the minimum wage, to restore medical benefits for seniors, and to end the war in Iraq.

And have another helping of steamed Icelandic Cod.
Posted by Hal at 10:46 PM