On Eating Our Young: Not a Way to Turn Texas Blue

Vince at Capitol Annex posted very cogent arguments on his blog this morning. It has been going around in this whole Texas House vote for Speaker, that Craddick Democrats need to be identified and targeted in the next election cycle, and that they need to know right now that this targeting is occurring in order to influence their vote.

Vince argues that targeting of Democrats will lead to net losses, not net gains in the ’08 election. I couldn’t agree more.

It has been argued that these “Craddick Ds” represent “safe” districts where any Democrat who wins the primary, wins the general, so these Democrats who vote for Craddick should be replaced in the next primary. However, this is not 100% the case, as Vince points out:

"However, seats like Hopson, Rose are forever lost if those two are defeated in primaries. I don’t think it is sound strategy to advocate that votes in the speaker’s race should result in these or other Democrats being challenged in the primary”

Well Kuffner thinks that Chuck Hopson is a McCall defector, but in looking at Patrick Rose of the 45th district it’s a different story. Rose won his seat in a squeaker in 2002, and did a little better in 2004, 54.6% to 45.4% and it appears he has finally entrenched himself in the last election, handily defeating his Republican opponent 60% to 40%. But that has taken time and name recognition and trust to have slowly built. All you will do in placing a primary challenger on the ballot in HD 45, challenging him on this single wedge issue, is to divide the party in HD 45. And if you succeed in replacing him on the ballot – over this one issue – you risk losing the seat.

Quite frankly, the whole thing may be moot. Unless I miss my guess, Tom Craddick has suffered 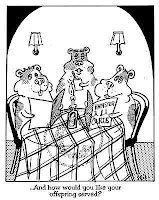 But I have said it once (more than once, but not here) and I’ll say it again, if Democrats truly want to take it back and make Texas blue, they simply have to give up their old habits of eating their young.
Posted by Hal at 4:55 PM