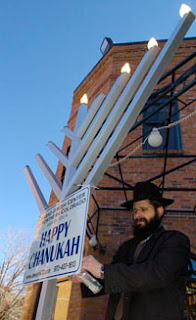 I like to think that we live in enlightened times. I like to compare the previous generation’s notion of the American “Melting Pot” where people of vastly different cultures coalesce and combine into a new and unique American culture to the new notion. The new notion being that America is a place of vast cultural diversity and that that diversity is celebrated. This is especially true in Southeast Texas, where a grand mixture of cultures exists.

But then all I have to do is open up a newspaper, or in this case, an online news website, and see that religious intolerance is still a problem here. FortBendNow reports that a Menorah placed at the entrance to New Territory Lakewood neighborhood was vandalized on Christmas Eve. As reported in FortBendNow:

"The Fort Bend County Sheriff’s Office received a complaint Sunday at about 10:45 a.m. that someone has destroyed a menorah, made from plastic pipe and illuminated with lights."

"The menorah, a symbol of the Jewish holiday of Hanukkah, was on display at Kendall Creek and Homeward Way at the entrance to New Territory’s Lakewind neighborhood, according to a sheriff’s dispatch"

"Close by, a nativity display was left untouched."

As a matter of fact, an incident in Harris County occurred where a man drove up to a Jewish household in Meyerland, punctured an inflatable menorah and drove off. And just to prove that this was no accident, the man returned and destroyed an inflatable bear next to it. 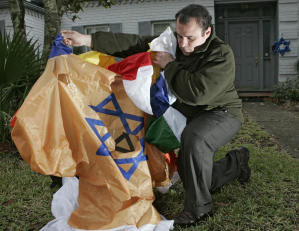 Take that you Jewish Bear!

Harris County and Fort Bend County police are trying to figure out if the cases are related. Well I tell you what, guys, while you are investigating whether these two hate crimes are related, maybe you ought to contact the police in Mountain View and Sunnyvale, California where two menorahs were vandalized. And while you are at it, give the police in Manatee County, Florida a call and see if you can find any similarity to the hate crime that involves the Star of David that was hanging on the door of Alan and Rachel Zion’s home, said star has gone missing, as well as the smearing of pork products on their son’s car. Oh, and by the way, make sure you talk to the police in St. James, New York. They actually have the vandal and his crime on tape. The image is blurry and in black and white, but apparently his MO is a “flying kick”.

Or maybe the only relationship between these hate crimes is that there are some Christians out there who want to celebrate their Lord’s birth by committing heinous acts of religious hate.

You know, I am not optimistic. I think that no matter how much we as a nation and as a society advance, no matter how much we become enlightened and begin to admire our multicultural society, there will remain amongst us those who cannot separate religious faith from religious bigotry. Just like sometimes a horse will be born with vestigal bones calling back to the Oligocene days when equines ran around on three toes, human avatars of bigotry and hate spring up from time to time.

You know, I’m not an expert here by any stretch of the imagination, but I think Jesus would take a dim view of the actions of these Neanderthals.

As a matter of fact, I am fairly certain, from what I’ve read about Him, that He would be mightily pissed off at them.
Posted by Hal at 12:46 PM