The Ironies of Living and Dying in a Muslim Sectarian State. 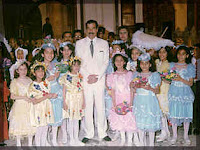 So we may or may not be entering a deathwatch for former Iraqi dictator Saddam Hussein. That he has been handed over to the Iraqi government for them to exercise their option to murder him is not in question. He’s in Iraqi hands. Although there are conflicting reports, CNN reported it.

The irony is one of religion and the calendar. Lots of people want to terminate him before the end of this year. Ah, but there’s the rub. Starting tomorrow the Muslim world enters another multi day holiday or Eid, known as Eid al-Adha. Eid al-Adha is a celebration of Allah’s mercy and provision to man. And it’s also about charity – reaching out to friends and family and those in need. Its celebration runs concurrent to the end of the Hadj, or pilgrimage to Mecca.

But during Eid, executions are strictly forbidden. And Eid starts in a few hours, at sunrise.

So if you want to whack Saddam Hussein before the end of the year, you have to do one of three things.

A devil’s dilemma if I ever saw one. Why? Well consider this:

There is such a concern that there will be an outpouring of Sunni anger and violence should they move up the clock and off Saddam in anticipation of a moratorium on executions during Eid. So in the violence that will ensue, more Iraqis will die when they lynch him.

There is also a concern that there will be an outpouring of Sunni anger and violence should they go the fatwa route and acquire special permission to bump him off during a religious holiday that celebrates charity. So in the violence that will ensue, still more Iraqis will die when they put a hit on him.

They are so concerned that some are saying why not just do him now and catch those who are planning to go out into the streets completely off guard. And that will really piss them off. So in the violence that will ensue, even more Iraqis will die when they take him out.

It’s a good word, I just try to keep the site clean, so I’ll use the new word that was coined by Norman Mailer in his 1948 war novel, “The Naked and the Dead”:

Any way they do it, they’re fugged.

So I have just three question here. Is life in Iraq so cheap that Iraqis are willing to sacrifice tens or hundreds of Iraqi lives so they can introduce this one man to the infernal regions? Is there any valid point to murdering this murderer? And am I the only one saying this? I could find only one answer.

Does this make any sense at all? I say put him on a plane and set him up in a Yurt in the Uyghur Autonomous region of central China.

Let him spend the rest of his life gathering fire wood for a living.