HD 29 Election: The Agony And The Ecstacy

Well, let’s cut to the chase: Dr. DiNovo did not win the special election.

He came in third in a field of four candidates. No one achieved a 50% plus 1 majority so the 29th Texas House District is in for ANOTHER election. This time to let the voters decide which of the two Republicans they want to represent them in Austin.

So, all you voters in Brazoria and Matagorda Counties, you get to choose between two conservative Republicans. It all boils down to a beauty pageant now, because the ideological choice is now nonexistent.

Kind of reminds me of the Soviet Union in its heyday.

Here are the final numbers: 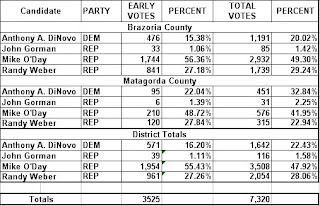 Did you catch that? All that had to happen in this race was for 400 more Democrats to come out and vote for Anthony DiNovo.

Then, instead of a Soviet-style beauty pageant, we would have an American-style knock down drag out ideology-based runoff election with voters getting a true choice.

But wait, the fun stuff is still to come.

Voter turnout in special elections, especially when the election is competing with voter time at the mall with their Holiday shopping errands is low. As I mentioned previously, voter turnout in the CD-23 election that got a Democrat elected by 10 percentage points was a whopping 18% (or nearly so). That is more than double what is usually expected in a special election where voters are made to come and decide one race for one office. Typically special elections bring in 7-8% of the electorate.

Statistic #1: What was the voter turnout in this HD-29 race?

That’s right, 4 percent of the district’s 178,833 registered voters decided who would represent the other 96% of them. Or at least, in this case, decided to reduce this race to a choice between Miss Red and Miss Cerise.

Tammy was dumfounded when I pointed it out to her. 4 Percent? Her 180 IQ told her that everything had been done correctly. Voters were contacted in a massive GOTV effort that had local Democratic activists shaking their heads in wonder. I can personally attest to this. I sat at the far end of a table calling voters in Brazoria Precinct 53, and heard muse call the same voters in Matagorda County that I called on Sunday – the ones who hadn’t voted yet. Democratic voters were contacted. They simply passed.

Statistic #2: How much did each vote cost?

Weber: Weber had $14,897.58 to spend. Assuming he spent all of it his voters were bought for a mere $7.25 apiece. Well, that got him in the runoff. But still, that’s a lot of Blockbuster movie rentals.

Gorman: I’ve tried and tried and you can’t divide zero into anything. It’s a mathematical impossibility. So, in the parlance of a TI-83 calculator, Gorman’s voter cost is “Undefined”.

DiNovo: $10.84 per voter. You have to wonder what the cost would have been if the average Democratic voter weren’t trying to play “hard to get” this time around. As in hard to get off of their apathetic behinds.

Know what I think? Three things happened. 1) Democratic voters in this area are so used to being beaten that they could not fathom being able to elect a Democrat when the odds were heavily in their favor if only they would act. 2) Democratic voters are so used to being presented a slate of Republican candidates to vote for that they simply pass. Source? Me. When I talked to human beings on the phone, they were always amazed that one of the candidates running was a Democrat. 3) Rick Perry – why not schedule a special election 6 days before Christmas? Why not use the Lord’s birthday as the ultimate voter suppression tool?

We three bloggers, Karl-Thomas, muse, and moi, were invited to the after-the-polls-close-dinner-and-election-watch. muse and KT were busy banging away on their laptops (I am a dinosaur, and blog on a desktop). The event was nice, cordial, and accented in laughter. I got to meet Anthony DiNovo’s wife, Bonnie, and their adorable children (Oh Krishna, Adele is such a cutie - Tammy is claiming her as payment).

And visit with the doctor himself.

I was there when Dr. DiNovo switched off his cell phone when the final results came in, and I was there when he finally turned it back on to talk to a KTRH reporter. He really didn’t want to talk and didn’t do an interview. One will come eventually, but for now he remains on low boil.

What does one do in the face of such Democratic voter apathy? Well I was privileged enough to see for myself having never personally experienced it: Black humor, irony, and wild shifts in decisions on the “what-ifs” that follow an indecisive election (as in what if Weber approaches Dr. DiNovo for an endorsement?).

And then finally this. What will happen tomorrow? Tomorrow Anthony DiNovo will go back to work treating patients. He is going to be feeling bad, especially for the people he feels he let down when he didn’t win.

And then it’s Christmas. And he won’t feel so bad. As a matter of fact, things are going to be pretty much okey-dokey.

Because Republicans are going to be spending money trying to beat each other at the polls. Money that may have gone to beating Democrats.

And Bonnie has her husband back.

Hal, how many of the 20 or so BCDP precinct chairs in the district were active in the campaign? What about the county party leadership. I see a lot of people in Muse's pictures from outside of the county. A lack of engagement with our voters is an organizational issue. The Dem index in Pearland is about 40% on a good day, there is no reason DiNovo should not have gotten into the runoff.