Republicans Will Try to Pass One More Belief-Based Act 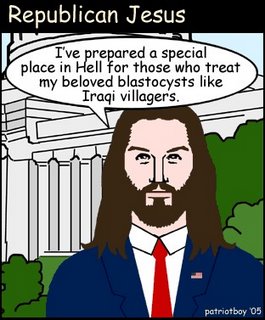 Well, since they were not able to get enough votes to open up the Eastern Gulf of Mexico to oil drilling, they’re going to try and pass a horrendous religious belief-based piece of crap legislation one more time.

Tomorrow they are going to put HR 6099 the Unborn Child Pain Awareness Act to a vote. Now, despite the wording, this isn’t a resolution about pain awareness of fetuses, Fetuses, from everything they tell me, aren’t aware of anything. It’s about making prospective abortion patients aware that there is “substantial evidence” that a fetus can feel pain at 20 weeks.

So when the patient is so-informed, the law would require that she is asked whether she wants her fetus to be anesthetized, too.

This is a blatant attempt to pass a law that requires abortion clinics to counsel their patients, one last time, not to have a abortion, all based on religious beliefs.

Here’s how I make my case.

The act uses the arguments like “at least by 20 weeks after fertilization, an unborn child has the physical structures necessary to experience pain”.

“There is substantial evidence that by 20 weeks after fertilization, unborn children draw away from certain stimuli in a manner which in an infant or an adult would be interpreted as a response to pain.”

That is, they’re saying “maybe”.

How about this one? Remember this? There is substantial evidence that Iraq is stockpiling weapons of mass destruction”.

Fellas, unless you have it dead-on accurate, you don’t traumatize an abortion patient one more time by offering your opinion that maybe the fetus will feel pain. The truth is, you don’t know for sure. The truth is no one knows for sure.

But here’s what I know about “certain knowledge”: it is extremely difficult for people to separate their beliefs from the facts and observations. Especially when their beliefs are strongly held. So strongly held that they want everyone else to have these beliefs, too. Or if not, to behave as if they did.

So here we have HR 6099. A bill specifically meant to put just one more article of stress on a woman who is already stressed to begin with.

But wait. Read the bottom of the article. Maybe it’s not ALL about harassing a young woman one more time with a government-sponsored religious tract. Maybe it’s about Republicans doing these zingers. It seems that Republicans have spent all their time these past few years scoring political points instead of getting legislation passed.

"Somebody will object. We want to know who that person is."
Posted by Hal at 7:41 PM