Of Refrigerator Magnets and $600 Dollar Boots - Only in Texas 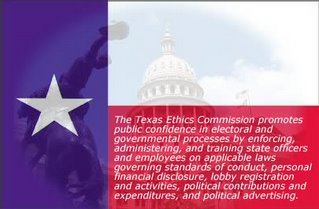 So it was bittersweet to me because I got an email message from an attorney working for my school district, informing me that as an employee of the State of Texas, I could not, by law, accept gifts from students or parents of students that had a value of $50 or more.

OK, well some would say that teachers are paid better than a Texas legislator and they would be correct. They pull down $25,120 (salary and per diem) per year for their jobs. In my district, starting salary of a new teacher is over 50% higher.

Now what’s with this? Why are our elected officials supported at poverty level compensation? In my home state of California, legislators there pull down a whopping $110,880 plus a per diem.

Well, it seems Texas, as my good friend Susan is often heard to say, ain't like other countries. Here in Texas, it is felt that legislators need to be independent citizen-legislators. Here is how Jeff Wentworth (R-San Antonio) puts it:

“The people of Texas have made it clear that they want low-paid, part-time citizen-legislators representing them in the Texas Legislature by repeatedly voting against constitutional amendments aimed at increasing the $600 per month salary legislators are paid.”

I doubt that most Texans even know what their legislators make, or if they were taught it in school they have forgotten. How can one believe that Texas legislators are paid so poorly if they are always shown living in the lap of luxury?

Here’s what I think. Texans vote down pay raises for elected officials just like there are some areas that vote down school bond issues – they don’t want to pay more money for this stuff. Besides, voters see their elected officials driving new cars and wearing $600 boots; who would vote for a pay raise for someone like that?

Here’s what I also think. Texas legislators like it as it is.

What better way to justify the system of campaign fund contributions and payments than to point to the low pay and benefits that they get? It presents a true ethical dilemma that legislators are not going to want to solve anytime soon. A system that promotes the image of a citizen-legislator also promotes, as mentioned on this website, “unintended consequences such as the strengthening of well-organized interests who can afford to hire a wide array of lobbyists – including legislators themselves.”

So a “highly paid” teacher in Texas cannot accept a gift that has a value of $50 or greater, but a “poorly paid” legislator in Texas can. Not only that, according to the latest TEC ruling, that has been given news coverage far and wide, Texas legislators can accept any sum as campaign contributions, and not report how much on their campaign fund disclosures.

I love irony. The system was designed to promote citizen-legislators, part-time workers to promote limited government. What the system actually does is promote 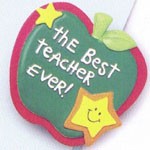 influence peddling of grotesque proportions that raises the likelihood that legislative ears are tuned to the monied interests, and not to the wants and needs of average citizens. And now it’s OK to keep it all hidden from view. How marvelous.

And, getting back to my secondary theme, I guess that given the current inflation rate, it’s safe for a long, long time for teachers to get just one more apple-shaped refrigerator magnet from an appreciative student.
Posted by Hal at 3:06 PM