The county by county summary of the CD 23 rout by Ciro Rodriguez over his well-funded Republican incumbent opponent (Krishna I love saying that) is to be found at the Texas Secretary of State website.

While the numbers tell you who won, they don't tell the story that special elections need: the turnout. So I thrashed through some sites trying to find the number of registered voters in the CD23 counties and failed miserably. But I finally came up with a method and the results are in the spreadsheet below. I am assuming that all counties but El Paso County are completely within CD23 boundaries. I kept El Paso numbers out of the totals for that reason. 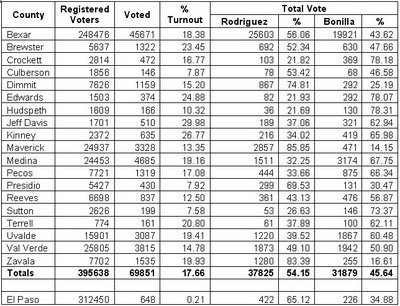 Pretty darned interesting, huh? Here we have a special election, one office is on the ballot, and it draws just shy of 18% of the voters over the district. That's about 10% more than you would expect on a good day.

I tell you, I've been reading all the old blogs about how Rodriguez had an uphill battle against a formidable opponent with name recognition . . . and this happens. One blogger said that in a special election, the incumbent is favored because of the low turnout. How so very true. It's so true that apparently the opposite is true if the turnout is respectable.

I got an email from Boyd Ritchie today (I know, everyone did) saying that we have one more race in the state to win - Anthony DiNovo's race in HD 29. So guys, that is where the last battle of the 2006 election is being waged. They need help down there getting out the vote. I also learned through muse that there is a poll judge in Alvin who was turning away Democrats by saying that this poll was for Republican candidates only.

Tammy, DiNovo's campaign manager, says that winning this is going to be "that much sweeter".
Posted by Hal at 7:45 PM

WHY am I not getting Boyd Richie emails, anymore? Wait, should I be happy about that?

Well I don't know muse, want me to forward this one to you so you can find out?

(he doesn't ask for money on this one)

You might mention that DiNovo is the only candidate in that race who is outwardly supporting the CABRLE cause against the expansion of the Blue Ridge mega-Landfill (170 ft. tall) in the tri-county area. Help us out with this as the TCEQ and BFI work to rush this absurd proposal through the state commission (that's supposed to be protecting the public, not BFI biz interests)...