Texas Fatcats to Build a PAC to Stop Hillary 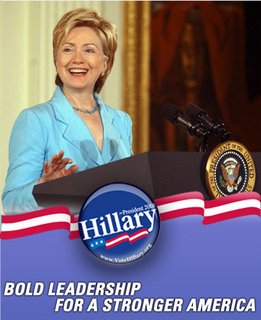 The Dallas Morning News had it first.

Senator Hillary Clinton hasn’t even made a formal announcement of her candidacy in the presidential race in ’08 and we already have a Dallas-based Texas conservative organizing an anti-Hillary PAC. He hopes that other Texas fatcat millionaires will pour money into his new PAC that is called “Stop Her Now”.

The PAC is a 527 group that was created with the sole intention of derailing her candidacy in its infancy. I don’t know about you, but the mere formation of this PAC gives her huge credibility with me. If they’re that afraid of her, then I have to be for her.

Says Richard Collins, owner of a chain of newspapers and PAC organizer:

“We're going to define Hillary as an ambitious, calculating, tough political operator who is trying to define herself as a centrist Democrat when, in fact, she's an ultraliberal Democrat."

I really liked that quote because it so very much defines this gynophobe. Is there anyone who doesn’t doubt that here in America, today, a politician running for high office needs these qualities: ambition, calculation, tough operator? These, and more I think. But here we have a guy forming a group to fire gun batteries at her because she has those qualities. Why? Womenfolk shouldn’t display these coarse qualities. It isn’t soft and feminine.

And the real reason I want Hillary Clinton to run?

I want to put women’s issues back on the front burner where they belong. I want Americans to reengage in the public controversy that we had in the 60’s and 70’s because I see severe erosion of the gains we made back then. I want people to examine their beliefs when they declare “anyone but a woman”.

And I want people to see Britney Spears and Paris Hilton as the laughingstocks that they are.
Posted by Hal at 6:55 PM

I think she is a red herring.

And I thought I was the only Hillary supporter in Texas aside from Garry Mauro!

I guess it also says something that neither of my candidates have actually *announced*, doesn't it?

I generally have not gotten behind one candidate until I see that they are the most electable. I have preferences, but I see myself as too far to the left to support my preferred candidate because my candidate is invariably too liberal for most people.

So is Hillary Clinton electable? John thinks not for whatever reason. I'm on the fence so far. I think there is a possibility that she may surprise some of us. But optimism is not my strong suit.

Right now, I just want her to run. And, yes, I think she'd make a good president.

Oh Krishna, the first '08 campaign soundbite. Now you have to come up with the melody. My suggestion: Tim Lehrer's "So long mom I'm off to drop the bomb".