And the Fort Bend Democrats PAC have a booth there.

It’s true. We rented space in an exhibition hall between some ladies selling jewelry and the guy that’s opening up a dinner (movie) theater in Rosenberg.

So why are we doing this?

And SOMEone has to sell campaign paraphernalia to people who hunger for them. They really do, you know. We are raking it in. Our club voted to buy campaign buttons and bumper stickers for the top tier presidential candidates, and Bill Richardson. We sell them wherever we go. At the Fort Bend County Fair people are snapping them up.

People want them and are willing to pay for them.

And you’re never going to guess who is selling bumper stickers and campaign pins like hotcakes.
Hillary.

Yes! In Texas! This is the one candidate that most Democrats who approached the table wanted a campaign material. So we conducted a sort of pay to vote poll (a Republican idea, I know, but we’re trying to make a profit here). We kept score of which candidate sold the most paraphernalia. One buyer, one vote.

And guess what else we got a lot of? “Thank you for being here.”

Know who else was there with a booth? The Fort Bend Republican Party. They had a booth with campaign literature and campaign signs. But every time I went by there, there was no one manning the booth.

We were visited by several Republicans who were the first to point this out. “Wow”, they would say, “All of you are here and no one is at the Republican Party booth”. One Republican precinct chair even went as far to say that his party was going in the wrong direction and it was no wonder there was no one at the booth. “Maybe it’s time to switch parties”, one of us offered. “Maybe so”, he responded.

But there is proof in pictures and I have a few of them. This one is a wide angle shot of our booth, with people actually manning (or should I say womaning) the booth. 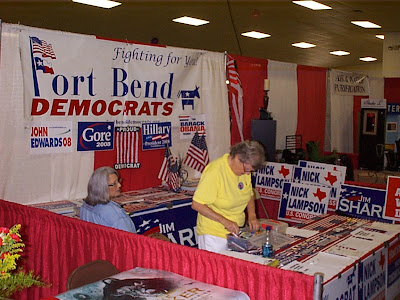 These are close-ups of our sales items. By the way, see the paper at the bottom? Yep that's Rick Noriega's petition. If you haven't signed one yet come on down and visit us at the fair. I am told, by the way, that Rick Noriega will make an appearance at the Fort Bend County Fair on Sunday. Be at the booth around 3 PM. Watch the magic. 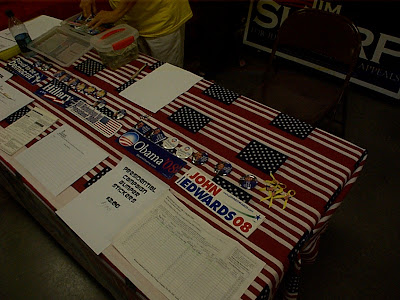 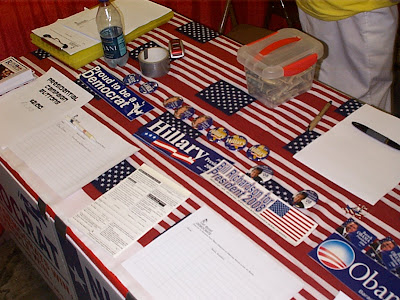 And then here’s the photographic proof that no one bothers to stop at, or man, the booth of the Dark Side. 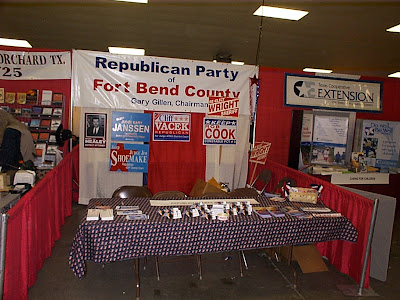 But someone on the Dark Side was not totally remiss. Someone got that trailer thing that the Republicans use, lashed it to a diesel belching tractor, and taxied weary fair-goers to their cars. I saw it on my way out. 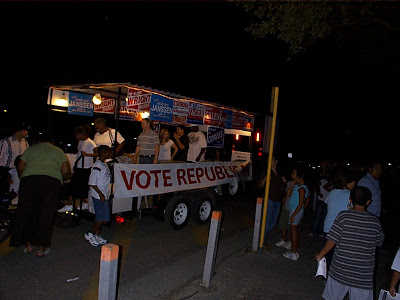 Isn’t that utterly hilarious? Look at the campaign signs. Some of those people aren’t even running in an election, this year or next.

But it looks good.

As someone from the "Dark Side" as you put it, let me just say a few words, it will not take much space here because Republicans can voice themselves with few strong words and leave a presence, everlasting!
I think the Republican booth looks good, manned or unmanned, not only that, Republicans do not need to be handed out all that stuff, we are inetlligent enough( not all) to walk up to the booth and select what we want wtihout somene standing behind the booth pushing it on all passersby! See, we do not accept hand outs, or demand that the people (tax payers) take care of us because we are not lazy individuals, rather self supporting and willing to work for our pay checks whereas Democrats (not all) would rather sit in their rotting rocking chairs on their front porch ( that the tax payers are paying for) eating the food ( that the tax payers pay for), drinking their beer ( that tax payers pay for) and watching their tv powered by electricity (that the tax payers pay for) No folks, we work, pay the taxes so ya'll can live your life free and clear( not all) but many, and the democrats that do pay taxes, you are suporting those peole, Go Figure!!!! Chew on that for a while!!!

No, I'll give my fellow human from the Dark Side a few pixels. I'm in a good mood, after all.

An "everlasting presence", however, reminds me of passing gas in an elevator. Now THAT is the gift that keeps on giving, much like Tom DeLay.

And thanks, by the way, for explaining why the Republican booth remained unmanned. I had no idea that it didn't actually need to be maintained by a human presence because Republicans were far too intelligent, and didn't need the human touch. That actually makes a lot of sense to me.

You weren't breast-fed, as a baby, were you?

Reading anon's comment, I guess I understand much better now the research that came out a few weeks ago saying that conservatives and liberals think with different parts of their brains. No kidding.

Anon, I'm a Democrat who makes a very nice salary defending companies when "inetlligent" people like you, who know everything, sue them. I pay a pile of taxes and want to buy you a beer with a few of those dollars. Yes, have one on me. Enjoy!

I was a 26 year leaver pulling repub (you know the die hard 30%). I gave that up when conservatism gave way to corporate welfare and the neo-cons took over the party for the sake of large corporate bottom lines. Of course I've noticed the "pay to play" has followed the dems too (See Grady P. & now a dem I crossed over for the first time and supported Lampson). Interestingly when I saw Lampsons last campaign finance disclosure statement it looked more like delays old list of owners/sponsors.

I guess I'm not a die-hard independent checking voting records and disclosure statements as I would suggest everyone do. I think the party system in many ways simply divides us and the money just follows the power. I'm looking for good people who won't take the "crony" money from now on. That may mean they will lose, but in good moral conscious I can not support the "sell-outs"

The Republican booth was empty because you pulled a scurvy lyin' Liberal trick, Hal. You shot the picture during daylight hours when you KNOW Vampires must stay in their coffins until nightfall. Shame on you!

Hal, thanks for being there. Your booth looks great! That anon poster is a credit to his party. =)