Hot Juicy Crow, Come and Get It! 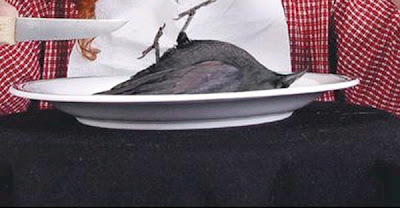 Sean Paul Kelly a blogger on Texas-based political blog “The Agonist” (Thoughtful, Global, Timely) has ordered his meal for the day. Kelly thought that Pro-Noriega bloggers got “played” by the Noriega campaign. And now has been shown how men with integrity behave.

“I don't buy Noriega's great espect for the blogosphere. He's just using it as another constituency group. Pander on dude! Cuz Texas bloggers got played. They just can't face it yet.”

There’s only one person that got “played” and his name is R.G. cliffe. WattS campaign members Jason Stanford and Kim Devlin were shadowing Noriega at the Texas Association of Broadcasters convention held early last month. Rick gave two speeches. They picked up on a rather clumsily worded paragraph in Rick’s speech and thought that if they could just get a reworking of that paragraph out in the mainstream press, they would have a wedge issue between Noriega and his blogger support. They shopped it around for awhile and R.G, who has this love/hate relationship with the blogging community, bit and bit hard.

Now, as an update to his blog post, Kelly has ordered a meal that includes crow salad, roasted crow stuffed with corn meal and pecans, mashed potatoes with crow gravy, crow legs, and for dessert, crow pie.

“When someone offers a stand-up, no nonsense apology like this well, I am just as happy as can be eating crow. So, Charles, if you would like to serve me up a dish, I'm prepared to eat it. An apology like that takes character.”

Oh, and by the way, ActBlue is still taking your donations to Rick Noriega’s campaign. We’re 75 donors short of our goal of 800 in a quarter. That number is up, by the way, over 2 days ago. So it looks like Noriega’s stock is still rising.
Posted by Hal at 5:19 PM