Fred Thompson was "discovered" much like Lana Turner was. He was sitting on a stool at Schwab’s Drug Store in Hollywood sipping at a Tequila Sunrise when who should come in and set his glassies on The Face? Roger Donaldson approached him one fateful day and asked whether he would play himself in his film depicting the 1977 corruption case against (Democratic) Tennessee governor Ray Blanton. Fred, in the tradition of Ronald “Bonzo” Reagan downed the rest of his TS and accepted.

And the rest is history. 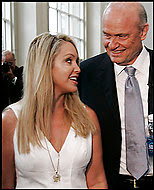 And he went for her reedlike and younger replacement: Nancy.

Much like Fred Thompson did. Only we need to replace the words “reedlike” for “top heavy”. Jeri has it upstairs (but below the neck), and doesn’t mind reminding everyone about that.

Thompson dumped his wife, Sarah Elizabeth Lindsey in 1985 and hooked up with his current main squeeze Jeri Thompson. Jeri was a breast-sucking baby girl when Fred was working as an attorney in DC and Nashville. Baby, baby girl.

This is very much a “family values” kind of family. Fred Thompson hearts his family. They love their family so much that they make up rules as they go along. Happy, happy family. 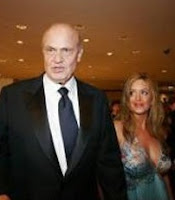 May Fred Thompson (and pretending First Lady, Jeri) be the Republican front runners. I am ever so hopeful that this model Republican couple will rise to the top of the pile.

And to Jeri, all I can say is this: I am sorry. Sorry that every night you have to say to yourself: “Eeeuwww”.

Freddie MUST have some hidden talent(s) that Jeri has discovered that we shall never know. And frankly, my dear, I don't ever want to know. I like your comparison. But at least Nancy never went out of her way to look like a bimbo in public. The last photo you have screams to me that it is not his country he will put first. Nero fiddled, Hitler diddled, guess what he'll do?