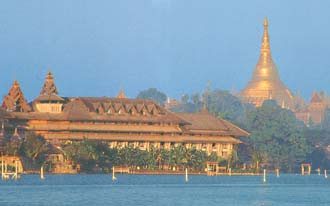 It’s half a world away, but today’s news of new violence against the peaceful people of Myanmar (formerly Burma) brought back memories from a month that I stayed there working in their national oil company’s laboratory.

I got out my slides and started looking at them, then realized that I should show them on the blog. That’s when I found out that my old scanner, an HP, is incompatible with Windows Vista. So no photos today. However, I now have a new mission in life besides teaching eager young minds and making blog posts. I'll use what I can find on the internet in the meantime (my pics are better, though). The one above, by the way is a shot of the Kandawgyi Palace Hotel, a real posh place where only the very rich stay. 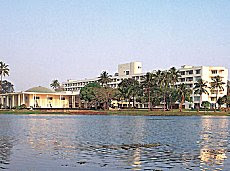 The Schwedagon Pagoda, built in the 14th century, is in the background. Yes that dome is covered in solid gold, they say, a foot thick. When I was there, most everyone else stayed at the Inya Lake Hotel at the right. It was built in the '60 by the Russians, back when Burma was within the Soviet sphere of influence.

Myanmar is a country with strong contrasts. There is opulence that stands side by side with abject poverty. Soldiers wear pants, everyone else wears a long skirt called a longgyi. Burma exports oil and gas because it has very few uses for petroleum products, even though they have produced oil for a century.

The country is actually composed of several nationalities that were all unified under British colonial rule. Burma is just one part of Myanmar, but Burmans are by and large the greatest majority. There is much discord between some nationalities and the ruling junta takes advantage of that, much like Saddam Hussein kept the lid on the Shia majority. 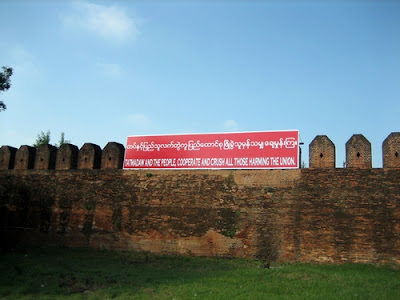 The army or Tatmadaw is the single largest employer in Burma. Many army recruits are young men, boys, really, from the Kandaw people who live in the southern parts of the country. Kandaws and Burmans don't get along very well. Burmese soldiers are fiercely loyal to the army as the alternative is poverty and hunger.

This is why it may be hard to take that the soldiers beat upon and opened fire on peaceful Buddhist monk protesters, but having personally seen this fierce loyalty in action is not much of a reach for me. The photo, by the way is of an exterior wall around the principal military base in Rangoon. These red signs are everywhere. They put various messages on them. The photographer is lucky that he or she wasn't seen taking this picture. Taking photos of any military installation in Burma gets you thrown in jail - and eventually deported.

What renewed this strife? Apparently it was the most recent interview of Daw Aung San Suu Kyi (Kyi is pronounced ‘chee’) told the interviewer that there would be continued sadness in her country as long as nothing is done about it. A crowd of monks were able to get past the barricade that has been in front of her house on University Ave. for years the other day, and this must have emboldened them.

Buddhist monks are highly respected in Burma. They practice a version of Buddhism called Theravada Buddhism. Monks are regarded as holy father figures, so it might have been second nature for soldiers to let them by. Think about it though, this is the first time they tried it since the early 90’s. The soldiers manning the barricade weren’t even born yet the last time there were protests in Rangoon. They were probably acting on their reverence for the men. The Junta, and the generals must have given them a lesson in loyalty.

Suu Kyi is no longer imprisoned in her home. She was moved to the infamous Insein Prison where she now languishes.

And so I will spend my evening watching the presidential debates, and thinking about the friends I made in Burma. Friends who are suffering again.
Posted by Hal at 8:04 PM