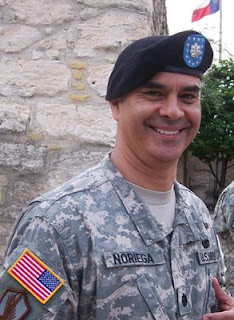 Crashing through the 800 Donors in a Quarter goal, Donors to the Rick Noriega for US Senate campaign currently stands at 969 across all the Noriega websites set up on ActBlue. On the Netroots for Noriega for Senate site, the number of donors is currently at 649.

But that’s not the impressive part. At Netroots for Noriega, the dollars contributed to Noriega’s Senate race to unseat Texas; junior senator John Cornyn stands at $106,740. Across all ActBlue sites a total of $123,470 have been donated.

These are for the most part small dollar donations and I think that’s because the money people are standing back biding their time trying to figure out if the Noriega dog will hunt.

People like the Noriega story. It impresses them and I think there will be bi-partisan support. How do I know this? My friend recently told me that her friend, who used to have legal dealings with John Cornyn when he was lawyering, regarded him not only as a friend but also voted for him in 2002. I just heard the other day that this person fully supports Rick.

She likes his story.

With Rick Noriega, people look beyond the politics, the platforms, and look at the man. Rick is a man they can trust to do the right thing, to vote the interests of his state and not be a toady, a yes-man. That stuff is not in what makes Rick Noriega tick.

If you like his story and haven’t contributed to the campaign yet (heck, even if you have already) the time is now to throw some dollars at Rick’s campaign at ActBlue. Do it before the quarterly deadline of September 30th. People are watching the campaign and if Rick shows that he can not only attract voters, but campaign contributions, the big dogs are going to sit up and take notice.

They will take this campaign to be exactly what it is: as serious as a heart attack.
Posted by Hal at 6:54 PM