Tuesday, unless something really big happens, is Half Empty Lite Day.

Yes, the Iranian president is making the rounds at the UN (yawn), yes the Supreme Court is going to listen to a case and see if it wants to ban the death penalty because death by lethal injection is “cruel and unusual” (as IF . . .).

No I thought I’d comment on something that caught my eye on CNN. They have the video clip here. Apparently, there are upscale apartment complexes in San Antonio and Dallas, where there is a code of personal appearance.

And that code says that if you have an excessive number of tattoos or an excessive number of body piercings, you can’t live there. This is a first. People with this particular lifestyle preference, where they decorate their bodies with an abundance of body art and jewelry stuck through their skin, are apparently eyesores to other people who don’t normally have a tattoo.

These are upscale apartments. They cost more to live there. I guess people pay a premium not to have to gaze at guys like Gilbert Carillo who has tattoos over most of the surfaces of his arms. The apartment managers took one look at Gilbert and handed back his security deposit.

Carillo says the practice is discriminatory, but KHOI reporters, who contacted one of the apartment owners, received an email message from him that said that this is not discriminatory because they don’t discriminate “based on race, color or gender, etc.”

So does having body art a bad tenant make? Frankly, I don’t 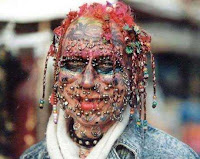 know. That would make a nice study. Apparently these apartment complex owners have an opinion that they do.

It makes you wonder though, where can people with lots of piercings and tattoos live? Do they have to own their own homes? Is it trailer park or nothing? ‘Cause people like this guy (or girl?) need a place to live out of the weather.

Where they don’t attract lightning.
Posted by Hal at 7:50 PM

Must be Texas...Portland landlords would be out of tenants!

Yep. Think so. Only the owners are from California. Or should I say Cawl-ee-Foooor-nya? These people are spread far and wide but only want to enforce their rules where they are enforceable. Like here in the last bastion of hate and intolerance. It has a name. It is the Republic of Texas.

maybe this isn't such a bad policy, if you think about it.

i feel uncomfortable being forced to live around deviant white christians...maybe a "tattoo-friendly" requirement could help move some of those unsold dallas condos that the upscale building owners are likely having trouble flipping-and who incorrectly think a tattoo-and-piercing guy might scare off the few remaining buyers left...

I know this is probably a serious issue, but, ROTFLMAO!!

Oh, and nice to meet you. Found you through following links.