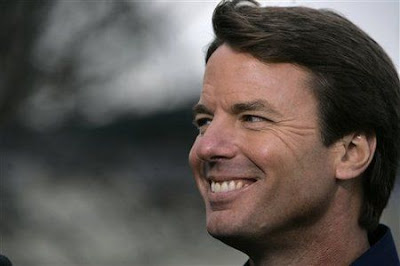 It’s the kind of international cooperation that was successful in helping Germany to foil a terrorist attack earlier this week.

In an obvious dig at the Bush Regime's handling of global terrorism, Edwards said:

"There is now only one key question we must ask ourselves: Are we any closer to getting rid of terrorism than we were six years ago? And the terrible answer is no, we're further away."

Why not just use NATO? It certainly still exists. Trouble is, NATO does not encompass countries where terrorists are acting. The UN isn’t feasible either because some of its member states promote global terrorism. No, Edwards says, you need a specific structure, and you recruit only those countries that have a horse in the race. And you exclude the countries that are recognized as agents for terrorism.

Fence sitters like Saudi Arabia and Pakistan would have to take a stand on this, or be left out of the equation. And this might just be a fix for Pakistan’s reluctance to deal with Al-Qaeda within its borders.

I think it’s not a bad idea. I think it has been around awhile, but Edwards is the first of the democratic candidates to jump on this idea and make it policy.

Oh, did I mention that I was supporting John Edwards for President of the United States? I did? Did you know that Edwards is the clear leader at the Texas Democratic Party’s online presidential poll? By a commanding lead? Polls say he’s the leader in Iowa, too.

Other polls say he’s in third place. Maybe. Third place isn’t a bad place to be right now. As the union endorsements continue to roll in, we should soon be seeing the numbers climb.

Am I being uncharacteristically optimistic?